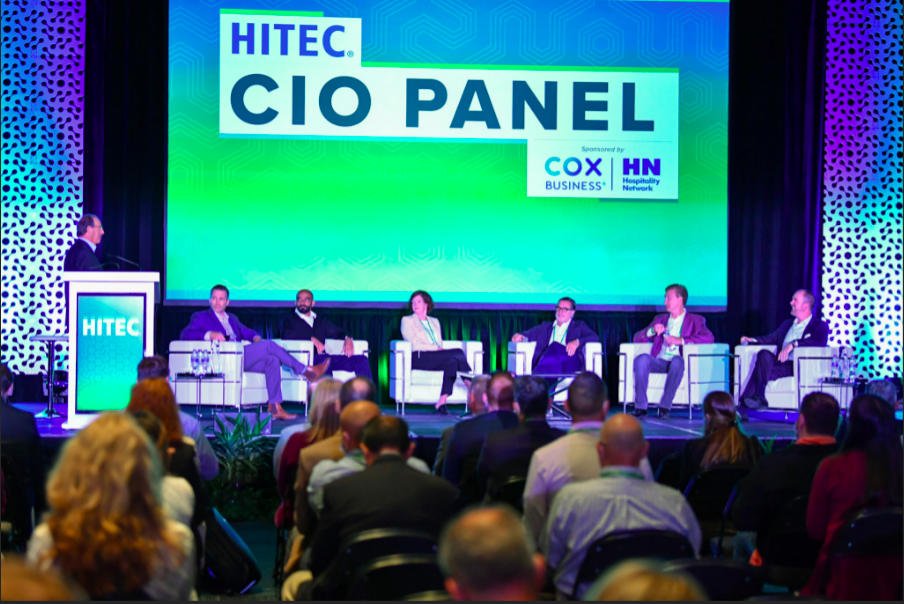 On the second day of HITEC Dallas at the Kay Bailey Hutchison Convention Center, several technology-focused executives convened for the Industry CIO Panel to discuss the pandemic’s effects on staff, the rising adoption of contactless technology and cybersecurity.

As the pandemic devastated the industry, technology departments were reduced, forcing hotel companies to pivot their focus.

Strickland noted that two months after the pandemic began, his staff was down 40%, and 80% of his vendor staff was reduced in terms of ongoing consulting agreements.

“How do you survive in that type of environment?” he asked. “The first thing we did was we reprioritized. We rejiggered our entire project portfolio, made adjustments on everything that we were working on. Second thing we did is we [asked], ‘What should we be working on that we never had on our radar before?’ So, we changed and launched some business programs as well.”

Kornik pointed out that by focusing on what was important, it made his team more efficient, adding, “We were able to move faster than we ever did pre-pandemic and because of this, we were able to make decisions faster and execute a lot faster.”

The pandemic allowed hotels to work on things they had put off. “Once the shock of the pandemic and the impact started to settle down a little bit, everybody understood that this was an incredible opportunity with almost empty hotels to finally work on our technology,” said Levie. “And in that priority, and with all the digital that needed to be implemented, we actually increased the staff.”

Like other areas of the hotel industry, technology has had a staffing issue where retaining staff has been a top priority. Sometimes, Beggs noted, you have to look at other departments to fill a role.

“We try to recognize talent, and maybe it comes from another department,” she said. “We steal regularly from each other. One of my best people is from the engineering department who had a talent [for technology].”

For Aimbridge, the industry’s top management company, it’s about the employee value proposition, Arthurs said, adding, “To me, that’s the intersection between extrinsic and intrinsic motivation, which really means, from a compensation standpoint, we need to be very competitive. We also need to provide other motivating factors for our team so that they enjoy being part of Aimbridge. In our case, it’s a purpose, it’s a sense of belonging, it’s a sense of membership and it’s a sense of being part of something bigger than oneself.”

Another factor is the company’s new headquarters in Plano, TX. “It’s very thoughtfully designed to bring people together and establish a culture and a sense of community and belonging,” Arthurs said. “When we bring in candidates into our office to interview, that has been an interesting differentiator. They can see our culture come to life just by walking into a building.”

The discussion moved to contactless technology, which has become even more important during a time where guests may want to have the least amount of human interaction because of COVID-19 and its variants.

Kornick believes there has to be a choice for guests on how contactless their stay will be. “Every guest likes to communicate or work in a different manner,” he said. “Some like a great contactless experience, while some still want that great front desk experience. So it’s giving them a choice in how they want to interact with us so that we don’t have to guess. I think people appreciate the flexibility of that contactless check-in. It was effective in giving guests a much shorter and a better experience if that’s the experience that they wanted.”

Al Qassim told a story about how his Dubai-based company tried to implement drive-through check-in. “The guests loved it,” he said. “They would get their documents and their keys in the car. Unfortunately at 100-plus degrees in Dubai, the employees didn’t like it as much.”

Another of his company’s resorts began using Whatsapp to communicate. “As soon as you check in, you are added to the Whatsapp group with housekeeping, F&B, reception, concierge and even the general manager,” al Qassim said. “All the details are sent to you there, and you type in what you want from whomever. If someone from F&B did not see [the message], all of his colleagues would alert him what the room is looking for. If you did not get a response, all of the team members would make sure that you got a response.”

Levie noted that contactless is the “new normal” and that the hotel industry is far behind other industries in adopting this technology.

“For us to really deliver touchless is not just little stages that we think we automate with an app, but really from start to finish,” he said. “We need to think full circle and be able to roll out and execute. We’re still dealing with huge hurdles and the fragmentation in our industry, but we need to overcome this quicker because when our guests are using other verticals, they’re spoiled.”

At Wyndham, Strickland found that contactless hasn’t resonated with its guests as it thought.

“We thought we were going to have more guests pull on contactless than we did,” he said. “We were guessing what the guest was going to want and then once we implemented some of these contactless solutions, we didn’t have the adoption that we were expecting from the guests.”

Cybersecurity has become a major focus for hotels considering all of the data breaches that have happened in the industry and other businesses. As Kornik noted, “The hardest part is you have to be right 100% of the time; the attacker has to be right once.”

Arthurs called cybersecurity “a team sport’,’ adding, “It’s about educating the end users and having partners who have strong security postures and investing in your internal capabilities. For us as an industry and, more broadly, for any user, we should strive to take the responsibility away from the user. They’ve got enough to worry about with all the systems that they use. We should create an environment where if they leave the front door open, nothing happens and that’s a challenge.”

Beggs agreed with the team sport assessment. “If you look at some of the big breaches that have happened over the years, they’ve often been from third parties that are supporting your systems,” she said. “So, I would just urge everybody to be careful about unattended access, making sure that vendors aren’t changing settings on you that you didn’t know they were going to change. Because, again, that’s part of the team as well—every single person who connects into your system as a support organization is part of your security.”