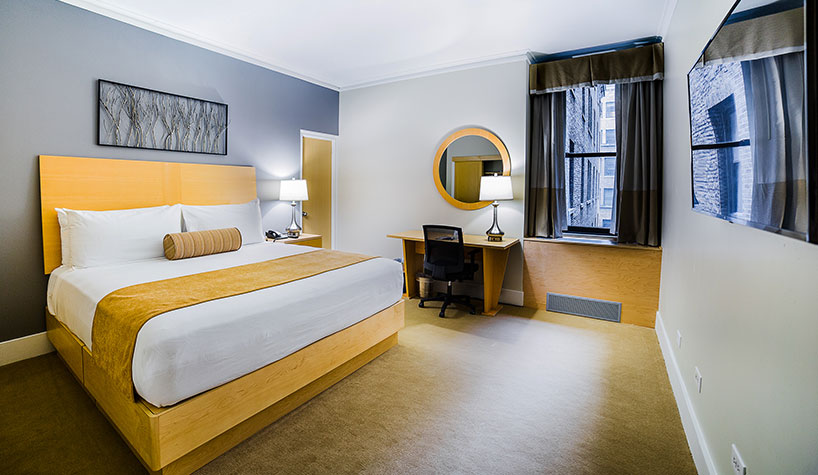 A renovated guestroom at The Hotel Pennsylvania in New York City.

NEW YORK—Hotel Pennsylvania, located across from New York’s Penn Station, turned 100; in celebration of this milestone, it has embarked on a renovation that marries the old with the new.

With 20 years under his belt at this property, GM Fred Grapstein is also part of the fabric of the Hotel Pennsylvania’s history.

“As part of the research we’ve done so far, we found that more people have stayed here than any other hotel in the world,” he said proudly. “It was built as the largest hotel globally, with 200 guestrooms and 220 baths. It was managed by Ellsworth Milton Statler, the most innovative hotelier who was instrumental in founding the Cornell University’s School of Hotel Administration. It was all about offering luxury at an affordable price. The price value relationship, especially in a city with some of the most expensive hotels, is significant.”

Today, the hotel offers 1,700 rooms and more than 90,000 sq. ft. of function and adjacent exhibit space. Accommodations are in the $175 to $200 price range, according to Grapstein. He also noted that the ongoing renovations have been met with strong positive reviews as the new look is “dramatically different.”

The Hotel Pennsylvania’s history plays a major role in the revitalization of the public and guest spaces, with a secret room on the 12th floor where guests and history buffs can immerse themselves in “The 1919 Pantry,” a visual historical experience of the amenities, services and images from the hotel’s past.

“One hundred years ago, there were two great hotels being built in conjunction with Penn Station and Grand Central Station. There was the Hotel Pennsylvania and the Hotel Commodore. The Hotel Pennsylvania was designed to work with the nearby railroad, and there was an underground passageway that exists today at Penn Station,” he said. “It allowed guests’ luggage to be transported from the trains, and it would be brought to the room while the guest was checking in above ground.”

There are also modern touches to meet the demands of today’s traveler, such as self-check-in and checkout kiosks; guestrooms with a top-to-bottom renovation that includes smart TVs and Bluetooth speakers for streaming content; and a communal gathering area called the Penn Plaza Collection on each floor, providing a workspace and lounge.

While the hotel’s revamp is moving toward the future, its history is part of what makes this property unique.

“There are a lot of E.M. Statler innovations here,” he said. “We were the only hotel in the world at the time to have a Servidor, which was meant to assist guests in getting their clothes and shoes cleaned. There’s a cavity in the door that could be accessed inside or outside the room. Most of the rooms still have the Servidor, but the purpose has changed. It allows guests to get elements of 100 years ago and have the most modern conveniences from the room renovations. It’s an artifact and an experiential part of the stay.”

In terms of the hotel’s new look and feel, it is ongoing in stages. The first 400 guestrooms are now complete, and the team is expecting 1,000 guestrooms to be finished within the first year of this renovation.

“We are looking at renovating the lobby and, for the most part, every update to the hotel that has been done in the last 100 years has been a mistake. A great deal of what we’re doing is removing the ‘improvements’ done in the last renovation,” he said.

Statler’s famous hotel slogans, “a bed and a bath for a dollar-and-a-half,” as well as “the guest is always right” launched the industry travelers know today. These ideals still hold true for Grapstein and his staff as they listened to guest requests for renovations. “Over the next two years, we hope to deliver and delight them,” he quipped.