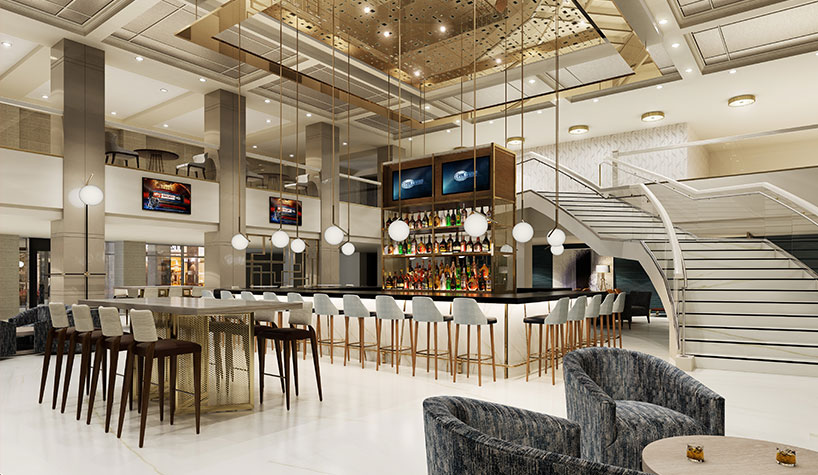 INTERNATIONAL REPORT—Hotels in Marriott’s family of brands are reimagining F&B concepts. Across the globe, hotels are adding dining outlets, chefs and new programs:

The Chicago Marriott Downtown Magnificent Mile partnered with Chicago-based Whitespace Interiors to bring travelers, tourists, local businesses and residents an accessible destination that reflect The Magnificent Mile’s intersection of “grace and grit” through a renovated bar and lobby with locally inspired food and drink. Centrally located steps off The Magnificent Mile, Reviver offers contemporary cocktails based on significant periods in Chicago, a selection of Chicago and Midwestern craft beer, a curated modern wine program and an elevated street food menu that carries the casual yet refined atmosphere of Michigan Ave. indoors.

Reviver’s “Chronomixoloy” program, developed by Food and Beverage Director James Samson and Bar Manager Bill Nykaza, features classic and adventurous cocktails that reflect a period expression of the beverage culture in Chicago, along with zero-proof options inspired by Prohibition.

Marriott Marquis San Diego Marina has released a new catering initiative for meetings and events. The program,“Neighborhood,” is inspired by the unique flavors, culinary specialties and cultural diversity of the dining scene found in San Diego’s neighborhoods. The Marriott Marquis’ new event experience features custom, chef­-crafted menus, complemented by theme and decor, that take meeting and event attendees on an immersive gastronomic tour of the city on the hotel’s Marina Terrace overlooking the marina and San Diego Bay.

Beach Communities—Inspired by the casual and carefree beach communities of Pacific Beach, Mission Beach and Ocean Beach, this menu keeps it cool with elevated “bar bites” and local favorites to chow down on, including wings, sliders and over-the-top nachos.

North Park—The trendy and urban community of North Park is represented through a menu that offers locally brewed craft beer and a hard kombucha bar, antipasto, vegan specialties and a create your ­own artisan pizza station.

Fiola at Dopolavoro Venezia is a reinvention of the resort’s fine-dining concept fashioned by Chef Fabio Trabocchi with a sophisticated, yet luxurious ambiance coupled with striking architectural details that date back to the 1920s. Within this setting, there will be nostalgic twists on traditional Venetian cuisine from the menu of Trabocchi’s Michelin-starred dining experience Fiola DC, located in Washington DC. The menu at Fiola at Dopolavoro Venezia will change daily with locally sourced seasonal ingredients from the centuries-old Rialto Market in Venice and the Adriatic Sea, as well as exclusive olive oil from the garden and olive grove on Isola della Rose.

For a more casual dining option on property, Cucina Daily restaurant will turn into a traditional pizzeria in the summer. Serving homemade pizzas curated by the resort’s own pizzaiolo, Cucina Daily will be open for pizza nightly from June through August.

To allow guests to experience some of JW Marriott Venice Resort & Spa’s culinary offerings firsthand, the resort has a new olive oil and wine tastings experience available weekly at the resort’s gourmet market, Dispensa. The olive oil is from JW Marriott Venice Resort & Spa’s own olive groves, which are harvested each October to create batch-made oil for use in on-site restaurants and JW Venice Spa.

A refined epicurean food festival, returning back to Isola delle Rose for its second edition following the inaugural event of last year, Gather by JW will bring together a roster of chefs, wine experts and other culinary talents and include a range of mindful experiences. In collaboration with Food & Wine, the three-day festival will take over the entire resort and island from Sept. 26-29.

Launching brand-wide, Family by JW offers experiences unique to each hotel for children ages four-12. The activities are curated to leave the whole family feeling inspired, whether cooking together in The Sapori Cooking Academy or going out for a family bike ride through the private island. The family pool area has also been outfitted with four new cabanas and an expanded adventure park offering new games for entertainment throughout the season.