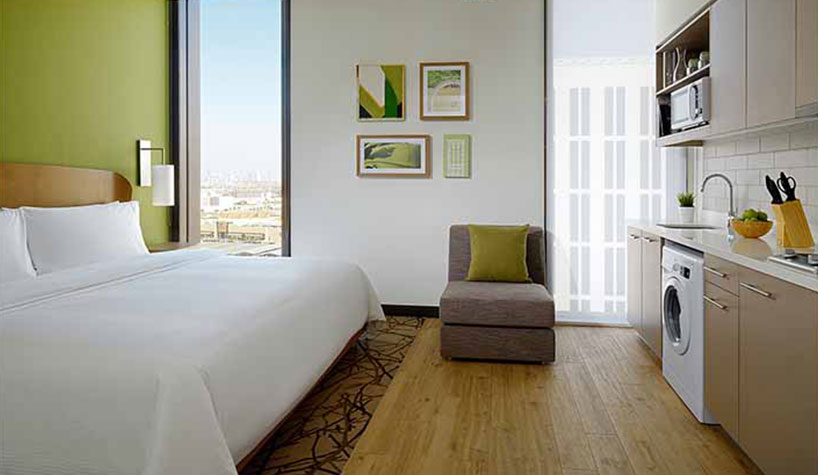 BESTHESDA, MD—Marriott International’s family of brands are making inroads in a number of international markets, including Dubai, Rome and Paris. Here’s a closer look:

Marriott International opened Element Me’aisam in Dubai, United Arab Emirates, marking the debut of the Element brand in the Middle East and Africa. It is owned and developed by Dubai Properties.

Certified as a LEED-related building, Element Me’aisam was built green from the ground up and adopts natural light, open spaces and healthier lifestyle options.

The property has 168 light-filled studios and one-bedroom suites with a fluid design, fully equipped kitchens, spa-inspired bathrooms and signature Heavenly Beds. Rooms at Element Me’aisam are equipped with keyless entry via mobile phone.

Element Me’aisam is situated in Dubai Production City in close proximity to Dubai Sports City and City Centre Me’aisam. The property is a part of Marriott International’s newest hotel complex in Dubai, which also features the recently opened Aloft Me’aisam.

Marriott International’s Autograph Collection Hotels has opened The Pantheon Iconic Rome Hotel in the heart of the Eternal City near The Pantheon in Rome. In addition, the hotel features Michelin-starred chef Pasquale Palamaro and design by Marco Piva Studio.

Milanese designer Marco Piva executed the hotel’s vision, drawing inspiration from the heritage and the city, specifically the nearby Pantheon’s geometry, light and building materials. Circular motifs, marble and brass are incorporated prominently throughout the hotel, while a careful study on the use of light creates the effect of scenography and a sense of surprise, according to the company. For example, original arches in the gallery leading off the lobby are covered in metal and embedded with lights to create the appearance of architectural illumination.

Each of the 79 guestrooms, including 20 suites, have custom-designed furniture and original works of art. Luxury upholstery is abundant; bathrooms are fashioned in marble and glass; and color schemes gradually brighten on each ascending floor.

Formerly the Radisson Blu CDG hotel, the property has undergone an extensive 15-month, multimillion-dollar refurbishment to relaunch as the Courtyard by Marriott Paris Roissy CDG Airport Hotel, making it the brand’s seventh hotel in France.

Located between the airport and the city center, the 240-bedroom hotel offers the latest Courtyard by Marriott design. This is brought to life through refreshed interiors with contemporary and efficient design that mixes a natural color palette with yellow and blue accents to create a casual yet vibrant atmosphere.

The lobby has been redesigned into a flexible space to foster social connections with guests, complete with GoBoard, a Courtyard by Marriott concept offering touchscreen technology that allows users to view the latest airport information and research popular tourist attractions. There’s also complimentary WiFi.

In terms of F&B offerings, Kitchen & Bar is the first of its kind in a Courtyard by Marriott hotel in Europe, and offers a bistro environment with French-inspired menu items.

New Hotels Open Around the Globe INTERNATIONAL REPORT—Hotel openings abroad include a new hotel in Denmark repurposed from the century-old Danish Post…
Marriott plans summer openings across the globe Marriott Bonvoy, Marriott International's portfolio of 30 hotel brands, will expand its footprint in leisure locales…
Hilton properties open in and around Indianapolis Recent openings in Indianapolis and its surrounding area include a dual-branded Hampton Inn and Homewood Suites…
Resorts World Las Vegas makes its debut on the Strip Resorts World Las Vegas, the first resort built on the Las Vegas Strip in more than…