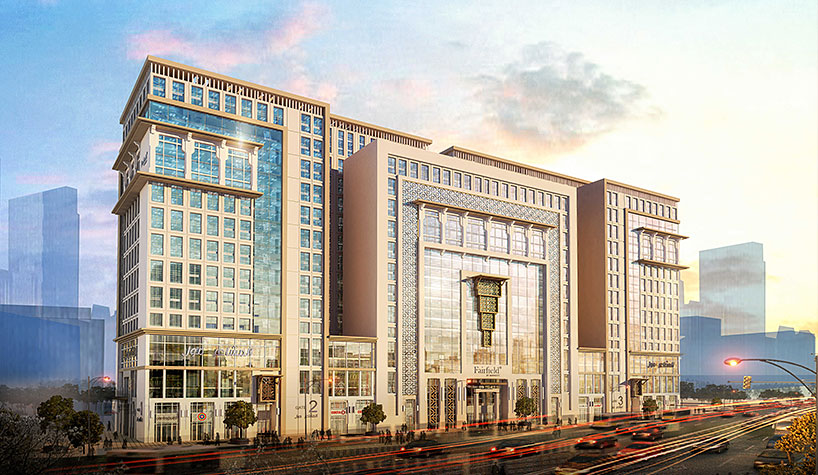 INTERNATIONAL REPORT—Both Marriott and IHG have signed agreements to expand their presence in the Kingdom of Saudi Arabia (KSA). Here’s a look:

Marriott International has signed an agreement with Nahdet Al-Mashaer to open a 2,600-room Fairfield by Marriott property in Makkah.

The Fairfield by Marriott Makkah Al Naseem is set to rise in five towers in the Al Naseem district and in close proximity to the Grand Mosque. Plans call for 2,600 well-appointed, spacious, modern suites that would separate areas for working and sleeping. The property’s public spaces and lounge areas are expected to have the Fairfield brand’s “Modern Calm” aesthetic, which embraces open layouts, multifunctional space and natural light.

“As a company, we remain focused on developing projects that further enhance Makkah as one of the most important destinations in Saudi Arabia, while supporting the overall growth and development of the Kingdom,” said Emad Hejazi, chairman, Nahdet Al-Mashaer. “We are excited to collaborate with Marriott International to open the Fairfield by Marriott Makkah Al Naseem, which will be one of the largest hotels in the Holy City. The reliability of the Fairfield by Marriott brand, Marriott’s world-class service standards and the central location of the property will make it an ideal hotel destination for those visiting for Umrah and Haj when the property opens in 2023.”

Saudi Arabia is currently Marriott International’s second-largest market in the Middle East, with a portfolio that consists of 29 properties and more than 8,000 rooms across nine brands and nine cities. The company expects to add 20 properties and more than 6,500 rooms across the Kingdom by 2024. Marriott’s development pipeline is expected to generate 6,000 new jobs in the country.

The agreements were announced at Saudi Arabia Hospitality Investment Conference (SHIC) 2020 in Riyadh.

Opening in 2024, InterContinental Dammam will be IHG’s first hotel in the city and will strengthen the company’s presence in KSA’s eastern provinces. Strategically located in the heart of the new city center, the hotel will be situated across the street from King Abdullah’s Cultural Complex and will be a short drive to the Coral Island. Dammam’s most popular shopping malls will be within a few minutes’ drive as well.

The property will have 289 designed rooms and amenities including three restaurants, an outdoor pool and deck, an indoor pool, a gym and six meeting rooms.

Opening later this year, the 121-rooms Holiday Inn Riyadh Al Malaz will be located in the city center of Riyadh, near government institutions and several ministries. The hotel will be the fifth Holiday Inn-branded hotel in Riyadh and will cater to the growing numbers of visitors to the capital city.

To further enhance the guest experience, the property will introduce the concept of an ‘Open Lobby,’ an approach that has transformed the traditional hotel lobby format by combining the front desk, lobby, F&B, lounge area and business center into one open, cohesive space. The hotel will also offer a pool, a gym, a business center, meeting rooms and two restaurants.

Pascal Gauvin, managing director, India, Middle East & Africa, IHG, said, “Both brands are well established in the kingdom and in demand for existing guest segments visiting the country. Furthermore, we are rapidly expanding our presence in Saudi Arabia to cater to an increasing number of guests coming to the country, as a result of vision 2030 and ensuing initiatives by the government.”

He continued, “In [the] last 12 months, we have signed 10 hotels across our portfolio of brands in the kingdom. We will also be opening an office in Riyadh to further drive our growth and performance in the country. These developments are testament to our commitment to the market and to respond to the needs of the travelers coming to the country.”

Saudi Arabia is a priority market for IHG in the Middle East, with a current portfolio of 33 hotels (15,388 rooms) across six brands including InterContinental, Crowne Plaza, Holiday Inn, Holiday Inn Express, Staybridge Suites and Voco, and 20 hotels (10,028 rooms) in the pipeline, set to open in the next three to five years.