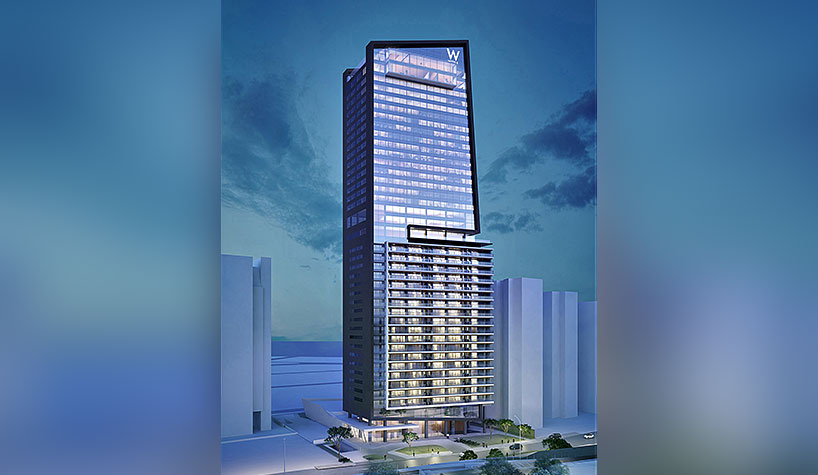 Slated to open in 2021, W São Paulo is slated to join this year’s lineup of W openings in the region, including W Panama (open as of February 2018) and W Costa Rica (opening in late 2018). Owned by HBR Realty, W São Paulo will be more than a first for W as Marriott International’s first luxury hotel in the country.

Designed by Nini Andrade Silva and the W brand’s design team, the hotel will have 179 luxe guestrooms, including two WOW Suites and one Extreme WOW Suite (the brand’s take on the Presidential Suite), as well as two feature restaurants, including rooftop dining and a signature Living Room (lobby) bar.

The property will also have a FIT center and expansive WET Deck (pool).

Westin Hotels & Resorts will arrive in the Republic of Maldives with the opening of The Westin Maldives Miriandhoo Resort.

An aerial view of The Westin Maldives Miriandhoo Resort reveals an outline in the shape of a fish, a distinctive reflection of the beauty of surrounding marine life, while the arrival jetty is structured to resemble clamshells and the oceans’ waves, according to the company.

The resort has 70 villas and suites, 41 on island and 29 over water. Each villa is shaped with an eco-friendly double roofing to create natural ventilation. Outdoor rainforest showers are a distinctive feature. Poised over the sea on stilts and with an area of almost 2,100 sq. ft. each, the overwater suites are among the largest a resort has to offer in the Baa Atoll region.

The hotel is seven stories high, has 122 rooms, four suites and five meeting rooms for a total of 2,143 sq. ft. of meeting space for events. Its restaurant AC Kitchen serves European-inspired dishes, while the lobby and trendy AC Lounge have a “chic, open and comfortable” ambiance. The hotel also offers a fitness center, free WiFi and a pet-friendly policy.

The Luxury Collection Debuts in Jordan

Developed by Eagle Hills Jordan, the 207-room hotel is located in the heart of Aqaba’s newest beachside destination, Saraya Aqaba. It is the second collaboration between Marriott International and Eagle Hills Jordan, following the debut of W Amman earlier this year. An additional two hotel collaborations will follow with the slated opening of The St. Regis Amman and The Westin Saraya Aqaba in the coming months.

The hotel is inspired by Middle Eastern tales and its architecture includes arabesque motifs, invoking the unique and colossal beauty of the country. Samuel Creations/MMac Associates echoed the strong Arabian influence of the architecture when designing the hotel’s interiors—in particular, the manor house.

Each of the 207 rooms at Al Manara, including 43 suites and two villas, include balconies and floor-to-ceiling windows with views of the Red Sea and mountain ranges. Soft furnishings showcase local weaving skills reflecting family traditions that have been handed down through generations. Guestrooms, set with dark wood furniture accented with mother-of-pearl, combine local elements such as a brass-topped coffee table and other decorative items, along with Luxury Collection beds and bathrooms with rainforest showers.