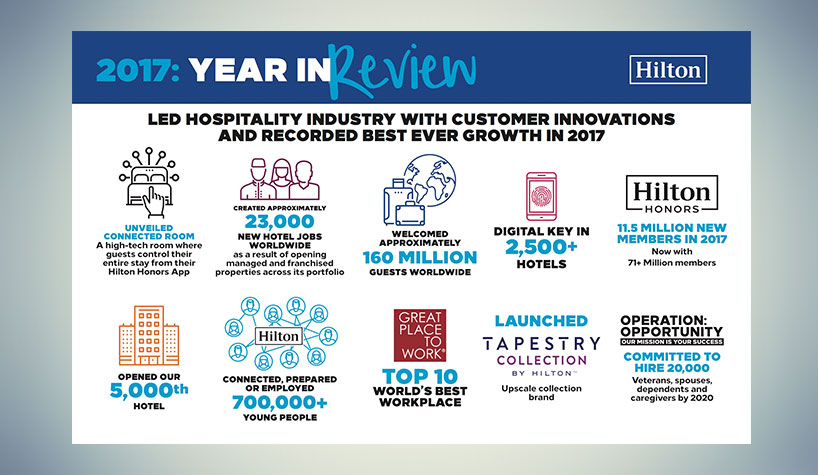 A Landmark Year for Hilton

It was a year of industry firsts for the brand, including the launch of Five Feet To Fitness; Hilton Honors loyalty program partnership with Amazon; Tapestry Collection by Hilton; and workplace innovations that received international recognition. It was also the year that Hilton introduced a ground-breaking concept—Connected Room—the first truly mobile-centric hotel room that will let guests personalize and control their stays from the Hilton Honors smartphone app.

“Last year was another pioneering year for our team around the world, with the launch of new technologies, brands, and partnerships that redefine the guest experience,” said Christopher J. Nassetta, president & CEO, Hilton. “After achieving record numbers across all development metrics, we look forward to driving even greater momentum as we charge toward Hilton’s centennial anniversary in 2019.”

“For the third straight year, Hilton recorded its best-ever results in net unit growth, approvals, and construction starts,” said Kevin Jacobs, CFO, Hilton. “We achieved 6.5% net unit growth, a record 51,574 net new rooms, and finished 2017 with the highest number of rooms under construction in the industry.”

Cambria Hotels finished the year by opening the most properties in a single year and increasing the pipeline to the largest in the brand’s history, according to the brand. The upscale brand franchised by Choice Hotels International Inc. now has 37 open hotels across the United States, including 10 that opened last year. In addition, there are more than 70 properties in the pipeline.

“Cambria Hotels’ rapid growth strengthens our position in the upscale segment. In addition to setting a record for openings this year, we also established important brand firsts, like opening on the West Coast in Los Angeles and bringing our first adaptive reuse to life in Chicago,” said Janis Cannon, SVP, upscale brands, Choice Hotels. “From the incredible relationships we have built with our developers, to the beautiful, locally inspired designs of our properties, this brand is on the move. We look forward to introducing customers to more Cambria hotels in the coming year, including in Nashville and Philadelphia opening early in 2018.”

Choice Hotels is committed to expanding the Cambria brand and expects to invest $475 million in corporate capital to grow the brand. The Cambria pipeline includes many of the top 50 U.S. markets. In total, 36 franchise signings were executed in 2017, and the brand continues to perform with a high LTR and RevPAR, according to the company.

Choice Hotels International’s soft brand the Ascend Hotel Collection reached a milestone by surpassing 200 properties open globally, with more than 50 in the pipeline. The brand finished 2017 with 56 hotels openings internationally.