In advance of the NYU Hospitality Industry Investment Conference, Lodging Econometrics (LE) analyzed several selected markets in the U.S. and their projected hotel openings over the next two years. As we have seen in late ’21 and so far in ’22, previously on-hold new hotel projects are moving forward to fruition. As a result, we expect to see an increase in new hotel openings over the next couple of years. 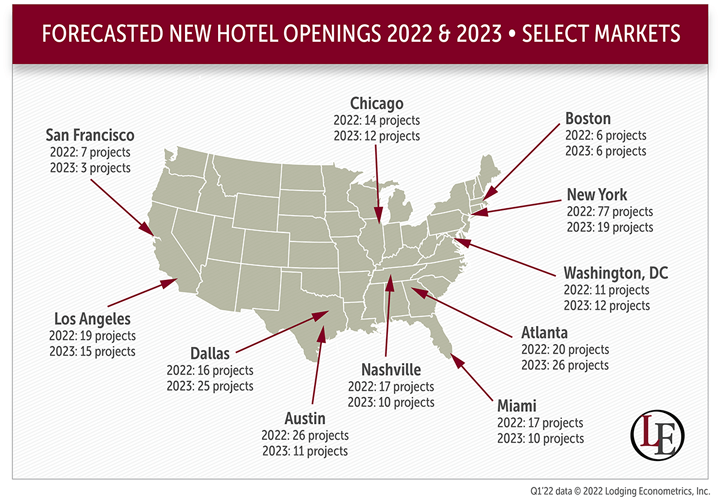 LE saw hotel projects, in many of these markets, delayed over the last two years. However, now as travel and demand begins to increase, developers in these markets are feverishly pushing their under-construction projects forward to open. Likewise, in many of these markets, projects in the early-planning and scheduled-to-start-in-the-next-12-months stages of the pipeline remain high, as developers have been waiting for the right time to begin their projects. Since most projects have about a 2-year build cycle, forecasted openings will temper slightly at the beginning of 2023, but are expected to become robust again in 2024 as these projects move into the under-construction stage, and then open. Overall, however, the U.S. in 2023 is expected to have more openings than in 2022.

LE’s forecast for new hotel openings is always being updated as construction timelines and opening dates are adjusted by developers. In Q2 ‘22, LE will publish its 2024 Forecast for New Hotel Openings and provide any updates to its 2023 forecast. To purchase information on LE’s hotel construction pipeline or for projections on new hotel openings in any market in the United States with supply growth rates please contact Lodging Econometrics at +1 603-431-8740 Ext. 0025 or visit: https://lodgingeconometrics.com/purchase-reports/to purchase our latest Construction Pipeline Trend Reports or Market Trend Reports.