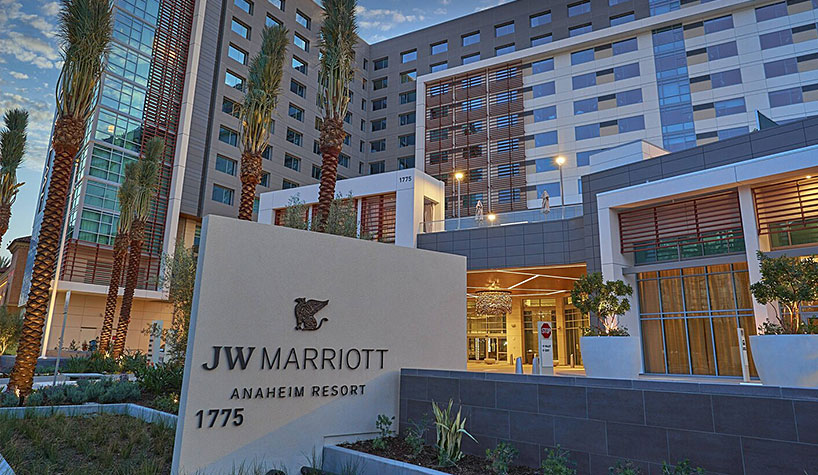 NATIONAL REPORT—Hotels that recently opened across the U.S. include a JW Marriott resort in Anaheim, CA; the first Viceroy hotel in the DC metro area; and more.

JW Marriott, Anaheim Resort
JW Marriott, Anaheim Resort in California has opened at the Anaheim GardenWalk, near Disneyland Resort and the Anaheim Convention Center. Kay Lang + Associates designed the interiors, which were inspired by Orange County’s agricultural history. The property’s 466 guestrooms, including 19 suites with quiet floors, feature barn door entrances to closets and bathrooms, and walk-in showers with stand-alone bathtubs.

The 178 guestrooms and suites offer oversized desks; Sonifi on the TV to allow for personal device streaming; marble bathrooms with walk-in glass showers; and voice-controlled Google NestHubs that act as a virtual concierge.

Other amenities include two dining outlets, Costa and Café Lido; a fresh-pressed juice program in partnership with Santa Barbara-based Juice Ranch; a variety of yoga classes; and 15,000 sq. ft. of meeting and event space with oceanfront views of the Pacific.

Designed by Simeone Deary Design Group, the hotel was inspired by fashion, with a tailor and seamstress concept. According to the hotel, the tailor influences the masculine forms of the hotel’s architecture while the seamstress brings in the feminine design details.

The 12-story property offers 196 guestrooms and suites with pillowtop beds and TVs with streaming capability. Amenities include a 12th-floor fitness center, lobby bar and an event space on the top floor, as well as more than 9,864 sq. ft. of flexible meeting space, including the 4,500-sq.-ft. Revel Hall ballroom.