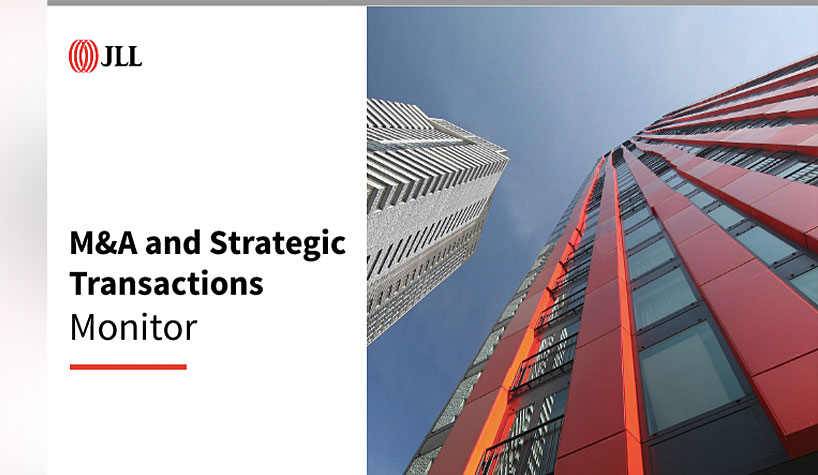 Outperforming strong expectations and driven both by strategic and private capital, 2021 has already been a record year for REIT M&A, which hit $108 billion in transaction volume as of Sept. 30. JLL’s Capital Markets M&A and Corporate Advisory group’s new M&A and Strategic Transactions Monitor report details the positive themes in the public capital markets space contributing to this unprecedented M&A surge.

REITs have shown strong earnings growth in 2021, with 63% of REITs beating consensus FFO estimates in the second quarter of 2021. This has contributed to REITs outperforming the S&P 500 by 1,100 basis points thus far and REITs are among the best performing of the closely followed 11 Global Industry Classification Standard sectors. Additionally, all major REIT sectors are in the green, with significant gains in previously out-of-favor sectors like retail (56% gain), office (15% gain) and hospitality (15% gain) for the year, while still showing positive performance in multi-housing and industrial. This has led to significant activity across both REIT M&A as well as broader commercial real estate transactions volume, which is on pace to reach 2019 level of approximately $80 billion.

“REIT M&A volume has broken a 15-year record that was set back in 2006,” said Steve Hentschel, head of the M&A and Corporate Advisory Group, JLL Capital Markets. “All major sectors contributed to the record, which implies a very favorable deal-making environment for our sector. Confidence has returned, most REITs have strong currencies to use in strategic mergers, debt is historically cheap and debt markets are liquid.”

Today, a median REIT owns approximately $4.5 billion of real estate, which is more than four times higher than the size of a median REIT over the last two decades. The benefit of economies of scale has fueled larger REITs over time, as larger REITs have a favorable cost of capital advantage, given they can borrow debt and issue equity at a lower cost and are able to leverage their general and administrative overhead better given size.

“We looked at all major REIT IPOs priced over the last five years and noticed a positive correlation between size of the listed REIT and its relative performance one year following the listing,” said Sheheryar Hafeez, managing director, JLL. “This further supports the argument that bigger is generally better in REIT-land.”

Additionally, inflation concerns are not anticipated to negatively affect REIT performance; in fact, inflation may drive positive performance. During the last 30 years or so, the U.S. economy has experienced five periods with similarly elevated inflation levels, and, being resilient performers, public REITs outperformed the broader market (S&P 500) four out of five times, with private real estate outperforming the S&P three out of five times. Though the impact of inflationary pressures is being watched, REITs are expected to continue to generate strong performance. Most of the REITs beat their consensus estimates in 2021 and REITs continue to be able to tap capital markets for growth, having raised approximately $60 billion in equity and unsecured debt capital in 2021 thus far.

GlobalData: Longer trips look set to boom post-COVID-19 Longer trips of more than 10 nights are increasingly in demand post-COVID-19, according to a poll…
Koddi: Travel continues bounce back with record demand for July 4th holiday As many Americans expect to travel during the Fourth of July weekend, travel advertising technology company…
HB Exclusive: Red Roof reports record year in 2021 Red Roof has surpassed 60,000 guestrooms across the U.S., and its growth in 2021 outperformed 2019…
BW Names New Chairman; Apple Hospitality REIT CFO Steps Down; More... INTERNATIONAL REPORT—Best Western has named its new chairman of the board, while the recent shake-ups in…