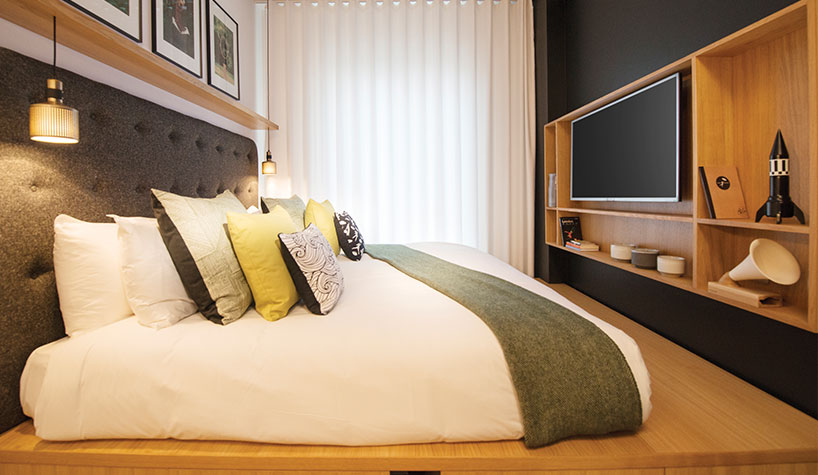 DUBLIN—With an interior design inspired by famed writer Oscar Wilde, Staycity Group opened the Wilde Aparthotels London. Dubbed “a cooler alternative to a hotel,” these aparthotels offer the residential feel of staying in an apartment with the services of a fine hotel.

The Staycity Group, an aparthotel operator founded by brothers Tom and Ger Walsh, is designed as a premium brand that is a reflection of their Irish provenance.

“Since I founded Staycity Group with my brother in 2004, starting with a single apartment in Dublin, we have concentrated on growing the concept of aparthotels, developing the brand and becoming leaders in what has since become a burgeoning sector,” said CEO Tom Walsh. “It has its own distinctive style with a high level of comfort and a cutting-edge design that will appeal to today’s city traveler.”

Irish playwright, bon viveur and humorist Oscar Wilde has became the iconic image for the Wilde brand. “His reputation and Irishness encapsulates everything we wanted to convey and we were delighted to be able to make contact with his surviving grandson, Merlin Holland, who was happy to open the first Wilde property for us,” said Walsh.

Staycity Group’s activity is robust, with sights set on its main goal: become the largest, pan-European city aparthotel brand, with 15,000 apartments across key cities by 2022. And, the company is well on its way. Currently, there are 5,500 apartments (operational and pipeline) across 10 European cities, with a number of sites in advanced negotiations that will take the operator to nearly 7,000 by the end of June.

“Having properties in the heart of a city leads to a stronger, more resilient business. While our core Staycity Aparthotels brand could get us into city centers in smaller cities, in larger cities we were being pushed a little bit further out than we would have liked. We want a strong business with aparthotels in the heart of great cities like London, Paris, Milan, Rome and Berlin, as well as in smaller capitals. To do this, we needed to create a brand that can get us there, alongside our core brand—hence the creation of Wilde Aparthotels by Staycity,” he said.

Wilde Aparthotels London’s target audience is wide-ranging, with a focus on singles and groups of people who are working away from home, young leisure couples, small leisure groups and families with young children.

“All enjoy a different, more relaxed way of staying away from home with the opportunity to prepare food and drinks in their apartment and come and go as they please,” he said. “Wilde is designed to fuse traditional with the unexpected, a mix of high and low-tech, comfort and adventure. We have set out to create an environment for curious people who seek both an individual and a shared experience. The design is unexpected and playful; it pulses and resonates, reflecting something about its particular location as well as its Irish heritage.”

At Wilde’s first site, on London’s Strand, there is a mix of studios and one-bed apartments, which are outfitted with fully equipped kitchenettes, as well as hotel rooms without this feature.

“The majority of our guests are free to prepare their own food and drink if they want, or they can order food and drink from a room-service menu sourced from nearby restaurants,” he said. Other amenities include rainfall showers, 43-in. smart TVs, XL-sized Hypnos mattresses, smart-touch room management, Handy smartphones, upscale bedding with handwoven wool blankets, high-end appliances such as a Nespresso machine, and storage solutions.

Future Wilde properties may include similar facilities to Staycity Aparthotels, including a small gym, in-house laundry, an all-day lounge with seating and a café for drinks and snacks.

Outside of the Strand property, there’s an opening plaque with a quote from Oscar Wilde that greets guests: “I have the simplest of tastes. I am always satisfied with the best.”

The property’s design is inspired by the playwright’s ethos, cultural background and character, noted Walsh. But make no mistake, this is not an Oscar Wilde-themed hotel.

“We were particularly honored that Oscar’s only grandson, Merlin Holland, opened The Strand for us in April,” Walsh said. “In a speech at the launch event, he reminded the audience of Oscar’s interest in interior design. Holland said: ‘I’m delighted to be involved with the opening of Wilde. My grandfather took a great interest in aesthetics, particularly in interior design. He memorably said, ‘Have nothing in your house that is not useful or beautiful.’”

The aparthotel is close to where Oscar Wilde lived in London, opposite London’s Vaudeville Theatre, which is currently hosting an Oscar Wilde season, and a short walk from the Oscar Wilde memorial, near Charing Cross station.

“The design and concept of Wilde was very much inspired by the character and life of Oscar Wilde—his quirkiness, style, wit, Irishness and his ability to amuse and inspire others,” Walsh said. “Oscar Wilde’s life, works and ultimate tragic early death are currently finding a new, modern audience, making him as relevant and as interesting today as ever. If we, in a small way, can help that happen, it can only be a good thing.”