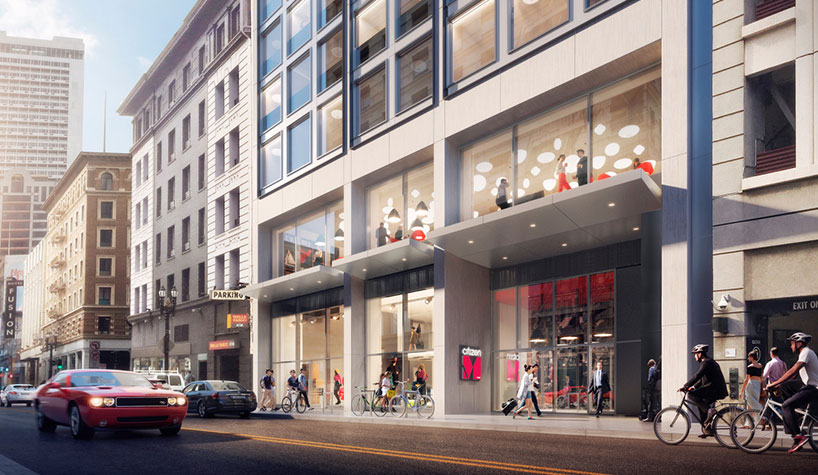 NATIONAL REPORT—Across the country, hotel properties are in development, readying to open. Here’s a look at a few:

CitizenM is set to break ground on its first location in California—and one of three planned in the Bay Area. CitizenM San Francisco Union Square, a 195-room hotel with a rooftop public open space, adds to the two new citizenM locations in New York City and two opening this year in Boston and Seattle. The company also has several other developments in the pipeline in North America, with a dozen hotels in major markets—including Washington, DC; Los Angeles; and Miami—already under development.

The public groundbreaking will be celebrated on Thursday, April 25, with representatives from the owner and operator CitizenM, the general contractor Webcor, and the architecture and design firm, Gensler. The CitizenM San Francisco Union Square hotel is designed by the Amsterdam-based firm Concrete, a long-time partner of citizenM.

The hotel will offer an expansive public lobby area and outdoor terraces, as well as proximity to the city’s premium Union Square shopping district. The new building will have 1,200 sq. f.t of privately owned public open space on its rooftop. Other amenities will include a fitness center, meeting space, and 6,100 sq. ft. of varied retail uses on its ground floor and mezzanine.

Holliday Fenoglio Fowler L.P. (HFF) has arranged $360 million in debt and equity financing for the development of the Four Seasons Hotel and Private Residences Nashville, a luxury mixed-use hotel and for-sale residential project in downtown Nashville, TN. Both the hotel and the for-sale residential units will be branded and operated by Four Seasons Hotels and Resorts. HFF worked on behalf of the developers, The Congress Group Inc. and AECOM Capital.

The project will overlook the Cumberland River as well as the adjacent Ascend Amphitheatre and is just across the John Seigenthaler pedestrian bridge from Nissan Stadium, home of the Tennessee Titans. Also nearby are Lower Broadway and Second Avenue, which serve as home to the city’s quintessential live music venues, restaurants and nightlife, including the Nashville Music City Center. The project is also less than a 15-minute drive from four out of the five top employers in Nashville, including Pinnacle Financial Partners and Bridgestone.

Bromley Companies has partnered with Concord Hospitality for the seven-story dual-branded Aloft and Element hotel in Midtown Tampa. The hotel will share 226 rooms, a rooftop terrace lounge and poolside Florida vibe.

Marriott International’s millennial-geared flags, Aloft and Element, will coexist in the same building footprint, with each hotel maintaining its own distinct look. In addition to the cityscape and water views from the rooftop lounge, guests will share a central lobby experience and other hotel amenities including a Bistro, and a chef-driven restaurant featuring small plates. The fitness center will be more than 1,000 sq. ft. (nearly double the size of a typical hotel fitness center). A separate, dedicated entrance at ground level and elevator for non-hotel guests heading to the rooftop terrace are planned.

The property will also share 24,000 sq. ft. of streetscape retail, meeting space on the seventh floor, and technological advances that are found throughout Midtown Tampa, including complementary WiFi connectivity and electronic key access through a mobile app.

The project will break ground in summer 2019 with opening planned for 2021.

Located about an hour north of Houston and around three hours from the major hubs of Austin, Dallas and San Antonio, the site of the new resort is currently home to La Torretta Lake Resort & Spa.  After an extensive renovation, the new Margaritaville Lake Resort, Lake Conroe will feature rooms in a main 20-story hotel tower, as well as waterfront villas on the lake. Two of the existing restaurants will be converted into signature Margaritaville dining concepts: LandShark Bar & Grill and 5 o’Clock Somewhere Bar & Grill. The property’s existing features will also be refreshed, including an 18-hole golf course, tennis facilities, spa, restaurants, outdoor pools, and 45,000 sq. ft. of indoor/outdoor meeting space.

SHR, based in Atlanta, and Wampold, based in Baton Rouge, LA, will serve as co-managing partners of the new resort. The two have partnered together on numerous projects over the past decade, with this as their first Margaritaville. SHR has been active in the Houston market for more than 20 years and currently owns two properties there, a Hyatt Regency and Hyatt Place hotel adjacent to Houston’s Galleria shopping center. Benchmark Global Hospitality will serve as resort manager.

Halekulani Corporation today announced the launch of www.halepuna.com, the newly­ designed website and booking platform for Halepuna Waikiki by Halekulani. Set to debut as the first luxury boutique hotel in Waikiki, “The House of Welcoming Waters” is now taking online reservations for stays commencing October 25, 2019.

The hotel will encompass 284 guestrooms and four suites with views of the Pacific Ocean. New York City­-based interior design firm Champalimaud has been engaged for the past two years to design the public spaces, rooms and suites, with a focus on subtly embracing the ethereal sensibilities of land and water. The design will be complemented by local artwork sourced in collaboration with the Honolulu Museum of Art.

The property will also feature the first ever Halekulani Bakery & Restaurant, the hotel’s full-­service, all­-day casual dining concept with a locally ­inspired menu focused on using indigenous ingredients. This newest of Halekulani restaurants will feature a variety of pastries, cakes and artisan breads created by a baker from the Imperial Hotel Tokyo.