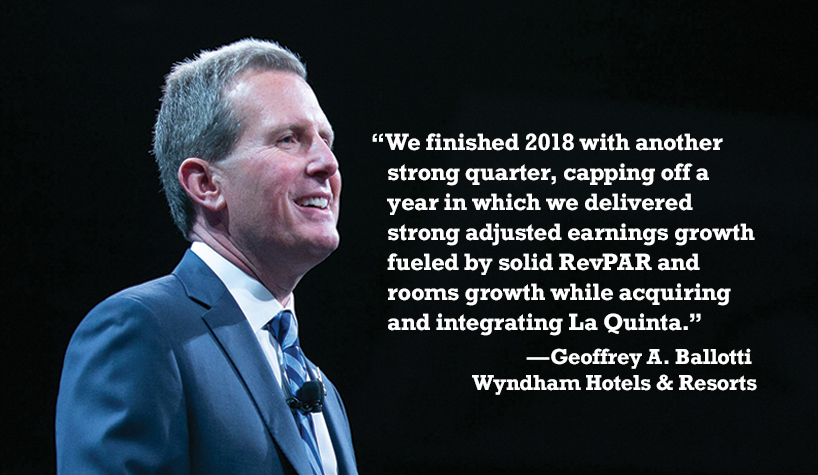 “We finished 2018 with another strong quarter, capping off a year in which we delivered strong adjusted earnings growth fueled by solid RevPAR and rooms growth while acquiring and integrating La Quinta,” said Geoffrey A. Ballotti, CEO in an earnings report. “We expect to continue to build on this strong foundation and are enthusiastic about our prospects for 2019 as we continue to execute our strategies and deploy capital in order to enhance value for shareholders.”

“La Quinta’s results post-acquisition and in the fourth quarter have been solid with RevPAR up 3.2% in Q4, and our integration efforts progressing as planned,” he said. “We remain impressed by La Quinta’s amazing sales, marketing, operations support, revenue management and franchise development teams, who have smoothly transitioned to Wyndham.”

Among the company’s highlights:

“Because of its RevPAR growth, La Quinta has been for the first time in its over 50-year history moved from the midscale to the upper-midscale segment of the industry by Smith Travel Research, something that our development team believes will help drive our franchise sales efforts,” he said.

“We also continue to expect that the last two major integration milestones, the migration of La Quinta off of legacy central system technology on to our state-of-the-art cloud-based distribution systems as well as the merging of their loyalty program will be substantially completed in the first-half of this year. This will allow us to deliver virtually all of our synergies by the second-half of 2019,” he said.

Ballotti stated the brand’s number one priority is increasing its system size with quality room growth. “As of Dec. 31, our total system had grown to approximately 810,000 rooms, which represents an 11% increase compared with the fourth quarter of 2017, and a 2% increase, excluding our 2018 acquisitions and dispositions,” he said. “In the United States, we added over 1,600 net rooms sequentially from Q3 to Q4. And importantly, we have now seen three straight quarters of net room growth in the United States. We opened more than 21,000 domestic rooms in 2018, which increased 6% organically from 2017, and 45% organically from 2016.”

Caesars Sees Revenue Growth in Q3 Ahead of Merger LAS VEGAS—Caesars Entertainment Corporation reported a 2.3% increase in revenue to $2.24 billion in the third…
In Q3, Ashford Sees Revenue Up 37% DALLAS—Ashford Inc. posted a strong third quarter, with an increase in total revenue, up 37%, an…
IHG Sees 8% Revenue Spike in 2019 ATLANTA—InterContinental Hotels Group (IHG) has reported its year-end 2019 results, citing revenue growth and record pipeline…
Bazin: Accor showed significant improvement in '21 Company reports $2.5 billion in revenue for the year