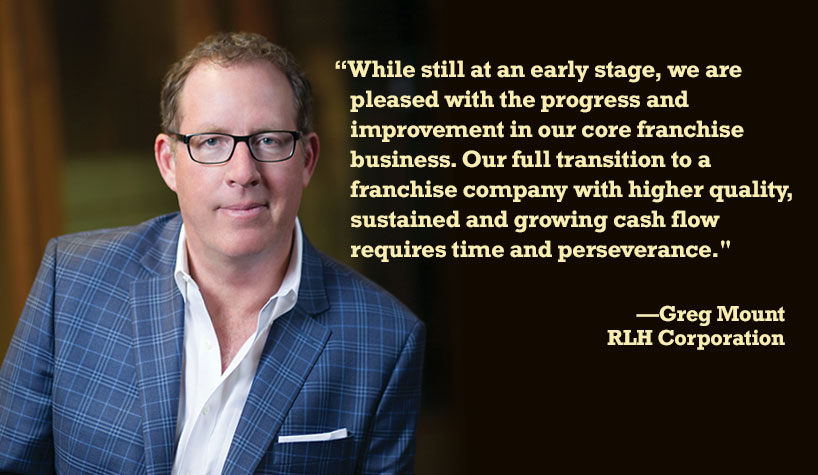 “While still at an early stage, we are pleased with the progress and improvement in our core franchise business. Our full transition to a franchise company with higher quality, sustained and growing cash flow requires time and perseverance,” stated Greg Mount, president/CEO, RLH Corporation, in an earnings report.

“Adjusted EBITDA in our core franchise business grew, and we are on pace to exceed our prior year margins. A highlight in the second quarter was the signing of 40 high-quality franchise license agreements, which allowed us to raise our 2019 expectations,” Mount said.

Net loss attributable to RLH Corporation for the quarter was $2.8 million or ($0.11) per share compared to a net loss attributable to RLH Corporation of $2.3 million or ($0.10) per share in the prior year period, primarily due to the disposition and lost revenue from hotels sold during 2018, partially offset by reductions in selling, general, administrative and other expenses.

Adjusted EBITDA for the second quarter was $3.7 million, as compared to $6.6 million in the second quarter of 2018. The year-over-year change was primarily attributable to the elimination of the $2.6 million of EBITDA from the hotels sold throughout 2018, a $900,000 decrease in year over year hotel segment performance, partially offset by a $100,000 improvement in franchise EBITDA and $500,000 reduction in SG&A.

Mount continued, “We have grown our quarterly recurring core franchise revenue at a compound annual growth rate of 44% to over $14.7 million from $2.4 million, since 2014. In addition, Canvas, our cloud-based hospitality management suite product, is meeting early success and we are seeing, as believed a 30% to 50% cost savings for customers and margins to RLH with the potential to rival our franchise business as Canvas grows. We have signed seven agreements thus far and are in discussions to further expand our pipeline of opportunities. This is just one example of another asset-light product that can lead to additional long-term value creation for our stakeholders.”