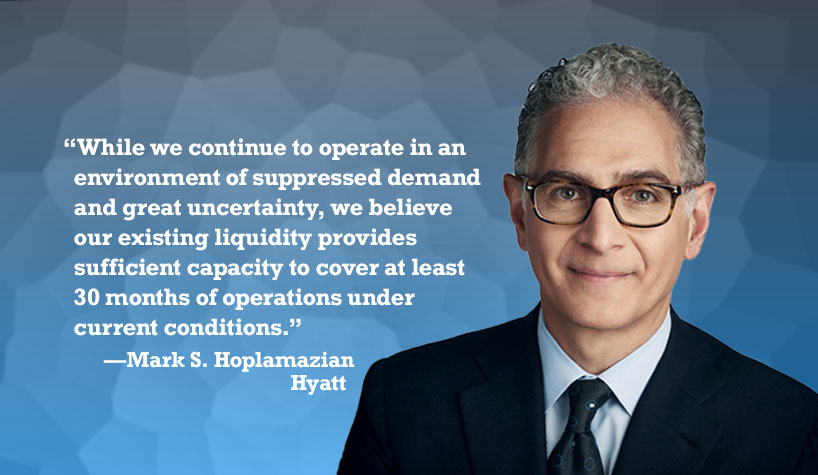 CHICAGO—Hyatt Hotels Corporation has reported its Q1 2020 financial results, citing a RevPAR decline of 28.1% while rooms grew 6.3%. Despite the dip, Hyatt leadership is confident that the company can weather the COVID-19 storm.

During an earnings call, Mark S. Hoplamazian, president/CEO of Hyatt Hotels Corporation, said that 65% of Hyatt’s managed hotel employee base has been furloughed or placed on leave. To aid these employees, there have been salary cuts for Hyatt leadership, and grants have been given through the Hyatt Care Fund and through donations. To date, grants have been given to nearly 500 colleagues and Hyatt plans for thousands more. Hyatt also continues to stay engaged with owners and advocate for government assistance for them.

Hoplamazian said, “As COVID-19 became a global pandemic, we took prompt and meaningful actions to manage the first phase of the impact of the virus. We obtained substantial additional cash, reduced investment and corporate spending to preserve cash and we reduced third-party hotel owners’ direct costs through this period. While we continue to operate in an environment of suppressed demand and great uncertainty, we believe our existing liquidity provides sufficient capacity to cover at least 30 months of operations under current conditions.”

Despite this unprecedented time for hospitality and travel, Hyatt’s pipeline increased 11% YOY, but Hopalamazian said that the company does expect delays in new openings and deals, but will shift its focus.

“In addition to progressing new development opportunities, we’re focused on conversion opportunities, which may be available in higher than normal volumes given the current conditions,” the CEO said in an earnings call.

Occupancy in Greater China have shown gradual improvement over the past few weeks, with occupancy approaching 25% at the end of April. Other parts of the world remain under quarantines and travel restrictions, which have resulted in significant declines in occupancy with uncertainty surrounding near-term improvement. System-wide occupancy rates as of April 30, 2020, are averaging approximately 15% for hotels that remain operational.