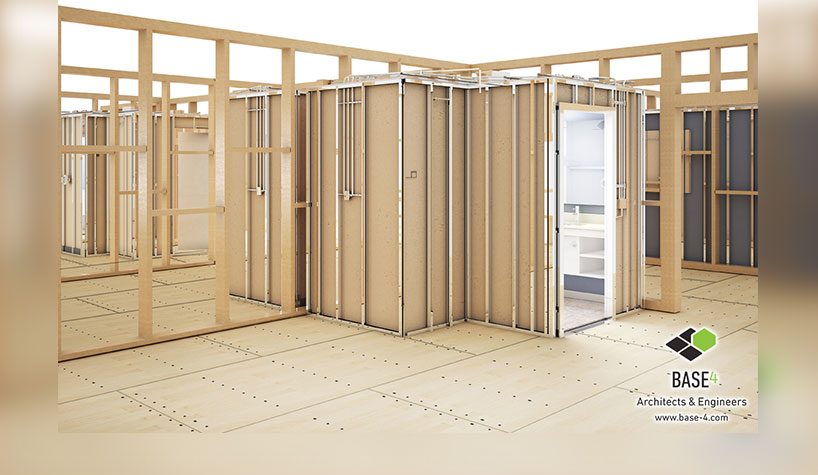 BOCA RATON, FL—Modular units can help save time and money for owners and developers. Bathroom pods, in particular, are a flexible option for new-build projects. According to Base4, bathroom pods consolidate more than 10 construction trades into one prefabricated product.

“Bathroom pods bring the benefits of volumetric modular construction to traditional builds. When you choose a bathroom pod, you outsource several trades to a high-precision modular production unit, meaning you or your general contractor won’t have to deal or coordinate with trade workers,” said Nate Loeffelholz, senior director, Base4, an architecture and engineering design firm that’s based here.

“This leads to a reduced project punch list, fewer site deliveries, and no scope for crew coordination, keeping the job site cleaner and emptier. And the pods you get are fully furnished, down to the mirror and shower fittings,” said Loeffelholz.

In addition to fewer headaches, you can also accelerate the project timeline as bathroom pods are produced simultaneously with construction.

“Modular bathroom pods can be especially valuable for hotel construction projects where the many bathrooms being built are often exact replicas of each other,” he said. “As seen in the auto industry, efficient production lines result in improved predictability in terms of time, quality of product and cost. Moreover, the pods are easy to install once shipped to the job site.”

Going modular is a trend in the hotel industry, with major player Marriott International setting out to build world’s tallest modular hotel in New York City this fall—in just 90 days.

“I see modular as meeting a vital need—not just trendsetting. While the latter comes with an expiry date, the modular way of building is an answer to several construction woes. I believe it is bound to capture the market,” he said. “As prefabrication—especially volumetric modular construction—is increasing in popularity, some developers are becoming more aware about prefab bathrooms. I think these modular pods are catching on—perhaps a little less widely than the mainstream modular construction.”

In terms of saving time and money, Loeffelholz points to all the time spent in coordinating with the general contractor, subcontractors, and trade workers; working with various procurement firms; and handling those adverse situations that may come.

“It is the simultaneous job site construction and pods production that saves time. Modular factories are high in precision, which translates to much less waste of material and potentially more savings,” he said. “Coming back to trade workers—you don’t have to worry about finding, administrating to, or paying them, which is especially important in this tough labor market. Money is also saved in other human resources involved in procurement and subcontracting.”

While bathroom pods have solid benefits, there are some challenges—pricing and lack of familiarity are among them.

“Bathroom pods often get ruled out during value engineering. The owner needs to be interested in the benefits of pods enough to be ready to offset any additional or upfront costs. In the competitive low-rise market, it might be scary to try out something new,” he said. “General contractors that are not familiar with the concept may be less receptive to a new way of building. As we all know, much of the construction industry today is antiquated, resistant to change, and stuck in time. Choosing the right designer and general contractor is vital to make modular pods work for you.”