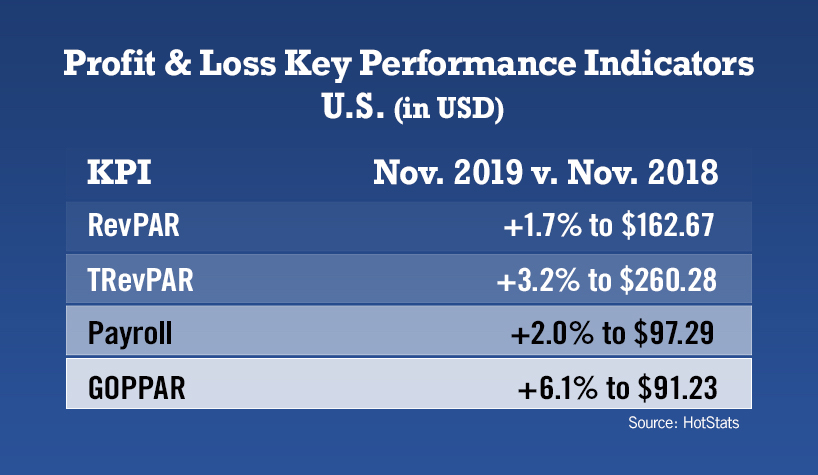 NATIONAL REPORT—A negative profit turn for U.S. hotels in October gave way to robust growth in November, as GOPPAR climbed 6.1% year-over-year, the second-highest increase of 2019, according to data from HotStats.

While profit growth was strong in the month, year-to-date it was somewhat muted, up only 0.3%. November was a strong revenue story, particularly on the food & beverage front. RevPAR was up 1.7% YOY, led by a 1% uptick in average room rate, while F&B RevPAR was up 4.1%. The combination resulted in a 3.2% YOY increase in total revenue, which is now up 1.5% YTD.

Declining expenses, though, were not the reason for the robust profit growth in the month. Labor costs on a per-available-room basis were up 2%; however, the strong revenue led to a 0.4-percentage-point decrease in labor costs as a percentage of total revenue. Other YOY costs were up, including sales and marketing (2.3%) and admin and general (11.5%). Total overhead costs on a PAR basis were up 1.2%. Profit margin was up 1 percentage point to 35.1%.

“After an October dip, it’s good to see the U.S. hotel industry back up on the revenue and profit side, in what has been a rather choppy year,” said David Eisen, director of hotel intelligence, Americas, HotStats. “Despite a strong November, the U.S. is set for slightly above to flat growth for the year.”

Los Angeles recorded one of its best months of 2019, reaching annual YOY highs in both RevPAR and TRevPAR gains—the former up 7.3%; the latter up 4.6%. RevPAR in the month was almost entirely led by occupancy, up 5.6 percentage points.

While total overheads and labor costs were both up on a YOY basis, 6.5% and 2.1%, respectively, the boosted revenue more than covered the expense growth, leading to the second-highest YOY GOPPAR increase of the year in the city, at 13.3%. Labor costs as a percentage of revenue came down 1 percentage point to 40.6%.

Profit margin for the month was up 2.2 percentage points to a still low 28.6%.

While New York City continually attains some of the highest rates and RevPAR numbers in the U.S., November continued what has been a dreadful year of YOY comps for the city in both revenue and profit.

To date, there has not been one month of YOY RevPAR or GOPPAR gain in the city. RevPAR was down 8.7% YOY in the month, as rate foundered 7% YOY, combined with a 1.6-percentage-point drop in occupancy. Total revenue was down 8%, impacted by YOY decreases in both rooms and food & beverage. Year to date, TRevPAR is down 4.6%.

GOPPAR was down a considerable 17.5% YOY, even though both total overheads and labor costs came down YOY in November, 1.7% and 1%, respectively—the weakened revenue too much to overcome. Profit margin was down 3.9 percentage points to 33.3%.

HotStats: MENA Hotel Performance Continues Downward Trend LONDON—HotStats has released findings of Middle East & North Africa hotel performance for 2019, in its…
HotStats: A year after hotel industry collapsed, guests—and performance—trickle… April 2020 was not for the faint of heart. The month will live in infamy for…
HotStats: Recent expense rise presents threat to hotel profit February stronger month all around
HotStats: Hotel profit climbs higher, but could Delta derail it? Global hotel performance is improving month by month. That’s the good news. The more pressing concern…