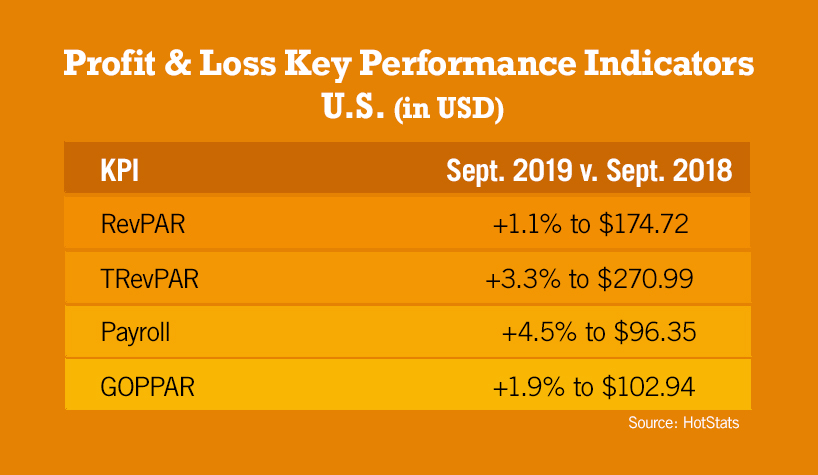 GOPPAR in the month was up 1.9% over the same time last year, part of a third quarter that saw profit grow 0.2%, dragged down by a challenging July when GOPPAR decreased 2% YOY, according to data from HotStats.

September’s bottom-line rise was fueled by a 1.1% YOY jump in RevPAR, led wholly by a 1.4% increase in average room rate. Occupancy for the month was down 0.3 percentage points YOY.

The corporate segment led the growth in RevPAR, with a stout 5.1% YOY increase in rate. A 4% rise in conference rate also contributed to overall RevPAR punchiness for the month.

Total revenue for the month was up 3.3% for the month over the same period last year, a combination of strong growth from the rooms department and positive growth in food and beverage, which was up 6.3% on a per-available-room basis. Strong performance from conference and banqueting (up 7.9% on a PAR basis) also contributed to TRevPAR growth.

And while revenue gains were strong in September, GOPPAR could have ultimately been stronger if not for an overall jump in expenses. Labor costs on a per-available-room basis were up 4.5% in the month over the same period last year, while total overheads increased 4.1% on a PAR basis.

Undistributed expenses played a role in cutting overall hotel profit, including total A&G expenses (up 5.4% YOY), sales and marketing (up 3.7% YOY) and property and maintenance (up 3.7% YOY, including a 1.7% increase in utility costs).

New Orleans had a stellar month. For a city that is perpetually in festive mode, New Orleans in September also benefitted from two New Orleans Saints home games, including the season opener on September 9. The month is also highlighted by Southern Decadence (oftentimes referred to as the Gay Mardi Gras), a six-day affair that runs through September 2 over Labor Day weekend.

With demand for the city constant, occupancy in the month was up 8.3 percentage points over the same time last year. Combined with a 4.9% rise in average rate, RevPAR grew a resounding 17.9% YOY.

With robust growth within the rooms department, unsurprisingly, TRevPAR climbed double digits as well, up 13.8% over last September. Beyond rooms, TRevPAR was aided by a 9.1% jump in F&B revenue on a per-available-room basis.

In all, GOPPAR climbed a hearty 22.6% YOY, more than 20 percentage points higher than the year-to-date number.

The Big Easy was able to drive substantial profit gains even in the face of rising costs, which included a 5.5% YOY jump in labor costs and a 10.9% uplift in utility costs, both on a per-available-room basis.

Profit margin for the city settled in at 40.8% in the month, 2.9 percentage points higher than at the same time last year.

New York City did not have the same success as New Orleans, even as it hosted the 74th session of the UN General Assembly, September 17-30.

RevPAR was down 0.7% YOY, brought down by a 1.1% decrease in average rate. Total revenue was also down in the month versus the same time last year, falling 0.4%.

GOPPAR for the month was down 4.1% over the same time last year, a product of a revenue decrease, plus escalating expenses, including a 13.6% jump in A&G costs on a PAR basis and a 1.4-percentage-point uptick in labor costs as a percentage of total revenue. Some good news: property and maintenance expenses were down 12.1% on a PAR basis, including a 1.2% decline in utility costs.

Still, by dollar amount, New York commands some of the strongest numbers in the U.S., evidenced by a YTD TRevPAR number that is 31% higher than the total U.S. aggregate.

HotStats: U.K. Sees RevPAR and GOPPAR Gains in Q3 INTERNATIONAL REPORT—The third quarter ended on a positive note for U.K. hotels as profit per available…
Report: U.S. GOPPAR Gains in July Illustrate Resiliency of Market NATIONAL REPORT—Hotels in the U.S. achieved their sixth month of year-over-year profit growth for 2019, underpinned…
U.S. GOPPAR Turns Negative After Recent Gains NATIONAL REPORT—Two consecutive months of profit gain were spoiled as the start of the fourth quarter…
HotStats: A year after hotel industry collapsed, guests—and performance—trickle… April 2020 was not for the faint of heart. The month will live in infamy for…