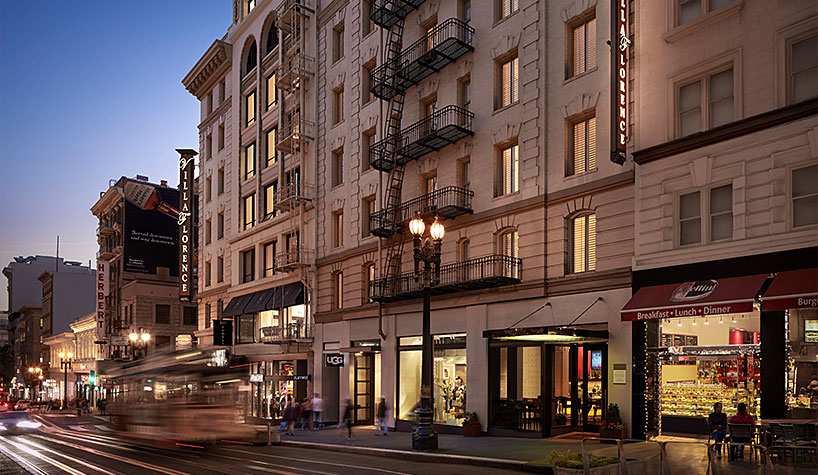 Properties on both coasts have new owners, including a historic hotel in San Francisco.

Villa Florence
An affiliate of AWH Partners LLC and The Roxborough Group LLC has acquired the Villa Florence Hotel and retail in San Francisco for $87.5 million. Pebblebrook Hotel Trust was the seller.

The partnership plans a full repositioning of the property, including a renovation of all 189 guestrooms, as well as the lobby and ground-floor restaurant. The hotel also includes more than 10,000 sq. ft. of retail along Powell and O’Farrell Streets. Spire Hospitality has taken over management of the property.

First opened in 1915, the property is less than one block from Union Square, the heart of San Francisco’s shopping and tourism district.

Each guestroom has a 55-in. LCD television with premium movie channels, a mini refrigerator, ample workspace, a personal electronic safe and plush pillows and linens. The property has three meeting rooms, totaling 1,400 sq. ft. of meeting space, a business center, a fitness center, valet parking and a lobby bar. The renovations to the property are slated for completion by the end of 2022.

Foley is the founder of Foley Family Wines, which includes top-tier vineyards and wineries in the U.S., France and Argentina, including northern California properties in Sonoma and Napa Counties and in Santa Barbara County’s Santa Ynez Valley. He is also the chairman of Foley Entertainment Group (FEG), which oversees a swath of sports properties including the Vegas Golden Knights, Henderson Silver Knights of the American Hockey League, Vegas Knight Hawks of the Indoor Football League, as well as leisure properties and restaurants across California, Nevada and Montana. FEG operates two community hockey facilities in Southern Nevada and will be debuting a 6,000-seat arena in Henderson, NV in the spring of 2022.

Located just a block from Santa Barbara’s waterfront and occupying three corners of the prominent State St. and Mason St. intersection, the 121‐room hotel, which recently underwent a major redevelopment, includes more than 21,000 sq. ft. of retail and restaurant space. The property has been heralded as the “gateway to the city” and is widely considered the major catalyst for development and renewed interest in Santa Barbara’s historic Funk Zone district upon its opening at the end of summer 2017 after about 17 years and millions invested in planning, permits and construction, the owners report.

The redeveloped, landmark property was originally home to the historic Hotel Californian which was built in 1925 and destroyed shortly after in a major earthquake. The property sat vacant and derelict for decades until it was purchased complete with permits as a major development project titled “La Entrada” (trans: gateway or entrance) in 2011 by 35 State Street Hotel Partners, after a deal with another buyer fell through. Herlihy was also a key player in the team responsible for that sale.

Under its new ownership, the hotel will benefit from the expertise of FEG, which is also led by co‐CEO Randy Morton, who helped run Las Vegas properties including Bellagio Resort and Casino and MGM Resorts International.

Aloft Portland, ME
Apple Hospitality REIT Inc. has acquired the 157-room Aloft Hotel on the waterfront in downtown Portland, ME, for a total purchase price of $51.2 million, or approximately $326,000 per key.

The newly built property is located amid Portland’s working waterfront and within walking distance of a variety of restaurants, shops, art galleries, museums and entertainment venues.

Jim Doucette and Earle Wason were the brokers for Wason Associates that represented the seller and presented the newly renovated 52-room, seven-apartment property.

The hotel sits on 15.4 acres of land and is located beside the University of Maine in Presque Isle. The property is near shops, sports venues, businesses and other education institutions like the Northern Maine Community College, as well as snowmobile and ATV trails.

Properties Change Hands in Oregon and Mexico Two hotels have new ownership in Oregon and Mexico. Here’s a look at the details:  Partnership…
Hotels under new management in Arizona and Maine Lodging Dynamics and Crestline have added new properties to their growing management portfolios. Lodging Dynamics to…
Hotels change hands in L.A., Spain Two hotels have recently been sold. Here’s a look: Braemar to acquire Mr. C Beverly Hills…
Times Square property sold; more hotels change hands Hotels around the country are changing hands, including an independent property in New York City and…