If there was one plan of action throughout the pandemic, it has been to expect the unexpected. From a higher-than-expected bounce back in the leisure segment because of revenge travel to the ill effects of the COVID variants, the industry has had to adjust on the fly with its planning.

During the latest Hotel Business Hot Topics session, “Hotel Strategies: Success Strategies for the Year Ahead,” with sponsor support from Hotel Effectiveness, industry experts offered their take on the current issues affecting the industry and how best to handle them. 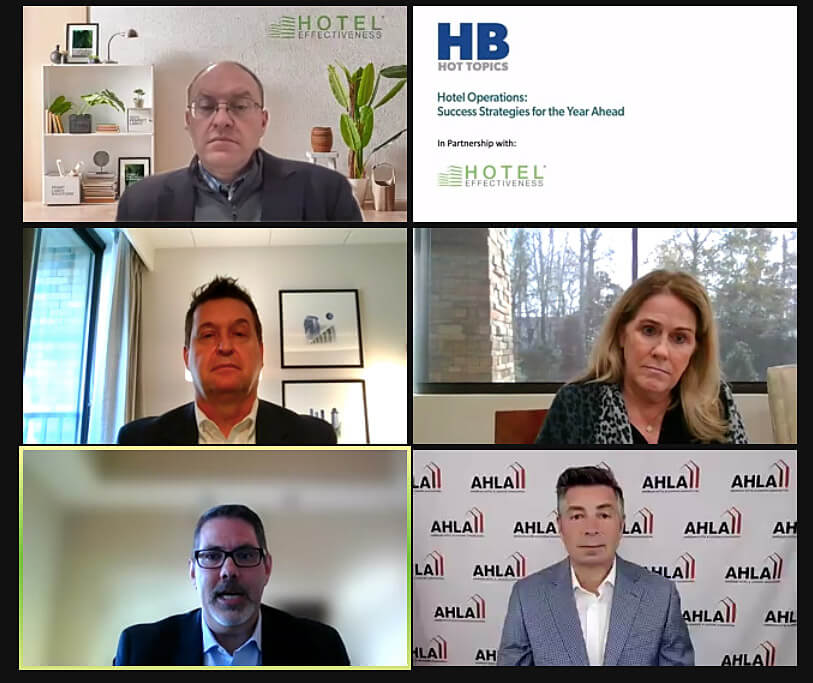 Rogers asked the panelists what they are expecting for the year given all of the variables out there, as well as those that are not even known yet.

Olson said that much like last year, leisure travel will start to take off again in mid-February with Valentine’s Day and President’s Day weekend. “That was the first big wave of leisure that had hit across the country,” he said. “So, we’re expecting something similar. Most experts are expecting that Omicron cases are going to start coming down somewhere around mid-February, and I think that pent-up demand still exists…We are absolutely optimistic that leisure demand will be just as strong—if not stronger—than last year. We expect to see ADR growth on that.”

One big difference is that we have last year as a guide. “The key is this year, as opposed to last year, is that we trust it,” he added. “We didn’t trust it until it was here. And so, from a labor planning perspective, we weren’t as prepared as we should have been. And I think that that goes for most of the industry, this year, a completely different approach. We are banking on the fact that it’s going to happen. So, all of our all of our plans and processes have been in place for the past few months preparing for that.”

Cummings agreed that they were not prepared for the rise in leisure travel last year. “We were closing inventory,” she said. “It was truly a tidal wave that came that we weren’t anticipating. What we’re doing right now is just monitoring our booking window and group pays and just overcommunicating with operations from our revenue team to the properties of what they are anticipating to come so that we can be prepared.”

Loman said that his company is studying forecasts and data that they have never done before, including from TSA checkpoints, the WHO and from searches. “Now, the booking window is so irregular, and people are very hesitant to book, but people are still planning,” he said. “They’re still thinking about that.”

He agreed that last year’s experience is helpful. “As we come out of this last variant, it’s very different than when we came out of the first one,” he added. “That’s going to play a big key role. We’re seeing the search [data] that’s higher than it was in ’19, ’20 and ’21. In those markets, we know what’s coming…We have got to focus on making sure we have the right rate position strategy, but also the right labor strategy because that’s probably going to be where a lot more of the work is going to come in.”

Ross dubbed the upcoming travel season Revenge Travel 2.0. “It is going to be bigger,” he said. “Part of the reason for that is we now have over 200 million people who are fully vaccinated in the U.S. Thanks to Omicron, another 40 or 50 million people will have recently had COVID and have at least temporary immunity. So, we have a massive number of people who are feeling bulletproof. Everybody who didn’t take a trip last year, just on optimism alone, is going to feel really good about booking travel and they’re doing it right now.”

He expects the influx of travelers to “hit us really hard,” adding, “The difference between this year and last year is that hotels have no excuse for not being prepared for it. Nobody should be complaining about not having enough staff, because we need to be modeling this now and starting the hiring and onboarding process now for the spring so that we’re not trying to play catch up all year. This is really important.”

Ross added that using models will help with the increase. “In addition, we need to use weekly dynamic staffing and planning models so that we can actually adjust our staffing with this wildly fluctuating occupancy every single day, so we don’t have to close rooms for sale,” he said. “Most hotels in the U.S., even the ones that were doing well, were closing anywhere from three to five rooms a night that they couldn’t sell because they couldn’t clean them. We need to solve for that by actually just staffing better and actually having more adequate staffing.”

Hot Topics—Hotel Operations: Success Strategies for the Year Ahead Experts offer insights and strategies for the new year
HB on the Scene: Looking Ahead—The future of hospitality operations Leaders discuss operational efficiency
Hot Topics—Lessons Learned: Strategies for a Resilient Portfolio There is no doubt that the COVID-19 pandemic hit the hospitality industry hard, but if there…
Web exclusive: Granite Hospitality finds success with M3's labor platform In an industry about its people, labor management—especially in today’s climate—is top-of-mind for hoteliers. Retaining labor…