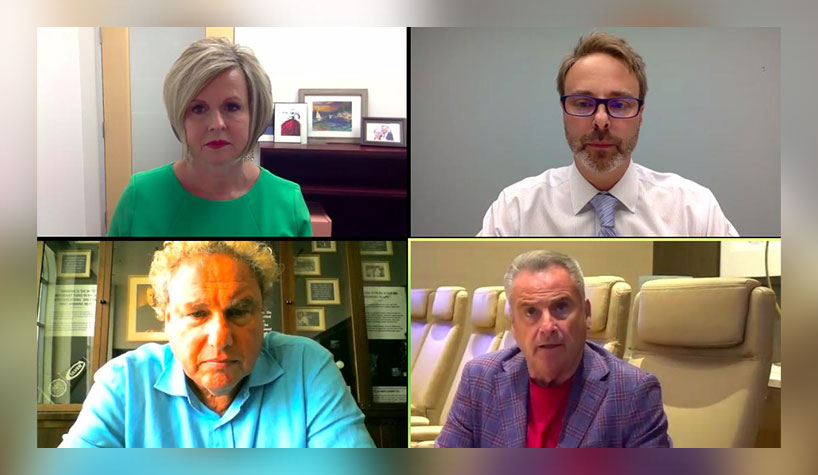 Sponsored by Collectable and Hotel Equities, ICD Hospitality Group Editor-in-Chief Christina Trauthwein and Publisher Allen Rolleri moderated the discussion, which focused on leadership strategies for mega brands during a time of crisis.

“Certainly, we’ve had so many opportunities to be involved with other sports teams… There’s no other brand like the New York Yankees in any sport. We certainly understood the significance of the potential relationship,” Allen said, commenting on the long-standing partnership between the two brands and their ability to withstand challenges.

Both Allen and Levine have seen their share of troubling times, but nothing quite like the uncertainty and economic turmoil that COVID-19 has spawned.

Both leaders agreed, however, that despite these unforeseen challenges, business has to continue as usual, for guests, for employees and for fans.

“We had to play this year because I think playing baseball gives people a sense of normalcy in their lives,” Levine said. “I think people were groping for the feeling of normalcy. It’s not normal that we’re playing without any fans, but when you’re home and watching the games on TV, it’s a sense of normalcy. For three hours, you don’t have to think about the virus, you don’t have to think about politics.”

Restoring hope and keeping brand confidence is one thing, but as two entertainment giants that generate significant revenue through playing games, how do you make up for that loss?

Levine said that although brands cannot produce in the way they’re used to, creativity is key, which both the Yankees and Hard Rock have proved by looking to online for new revenue streams.

“There are other ways [to generate revenue]. We have virtual signage, sell virtual signage, we find new sponsors that maybe weren’t interested in baseball or the Yankees then but are now. Find a way to reach young people,” Levine said.

Although the Yankees—and baseball as a whole—prides itself on tradition, the team recently completed a deal with video-sharing mobile app TikTok to reach a younger demographic, an ongoing struggle for the sport.

“The idea is to be nimble, flexible and try and alter your strategy and the circumstances that you’re in and not being afraid to fail,” Levine suggested. “It’s easy to just throw in the towel in these times. So that’s what we expect of our people. They’ve risen to the occasion and that’s the way we try to lead by example.”

Because of the unique nature of the pandemic, it seems everyone is keeping an open mind so that business stays afloat. Allen said that he’s been speaking with officials who have in the past been reluctant to move business online but are now receptive to the possibility.

“I’m literally talking to governors who would refuse to have the conversation about sports betting and internet gaming at the end of last year that are now saying, ‘Jim, let’s meet, let’s talk about alternative ways,’” Allen said. “We always knew that the casino industry—the integrated resort—30% of that revenue some time in the next five to 10 years is going to come from online.”

Look for complete coverage in our September 15 issue along with the Hot Topics Zoom session available online at hotelbusiness.com.