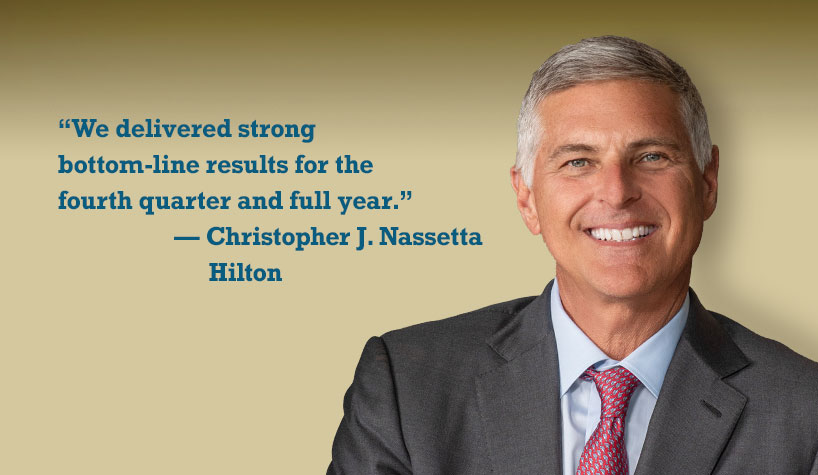 “We delivered strong bottom-line results for the fourth quarter and full year,” said Christopher J. Nassetta, president/CEO, Hilton. “Adjusted EBITDA and diluted EPS, adjusted for special items, exceeded the high end of our guidance as a result of our resilient business model and strong net unit growth. We carry positive momentum into 2020 with expectations of continued strong net unit growth. We are also thrilled with the introduction of Tempo by Hilton, our new lifestyle brand that will provide another platform for growth in the future.”

Net income and Adjusted EBITDA were $886 million and $2.3 billion, respectively, for the year, compared to $769 million and $2.1 billion, respectively, for 2018. During 2019, the company completed the sale of the Hilton Odawara Resort & Spa and subsequently entered into a 30-year management contract with the purchaser of the hotel. As a result of the sale, the company recognized a pre-tax gain of $81 million.

As of December 31, 2019, Hilton’s development pipeline totaled more than 2,570 hotels consisting of more than 387,000 rooms throughout 116 countries and territories, including 35 countries and territories where Hilton does not currently have any open hotels. Additionally, of the rooms in the development pipeline, 215,000 rooms were located outside the U.S., and 193,000 rooms were under construction.