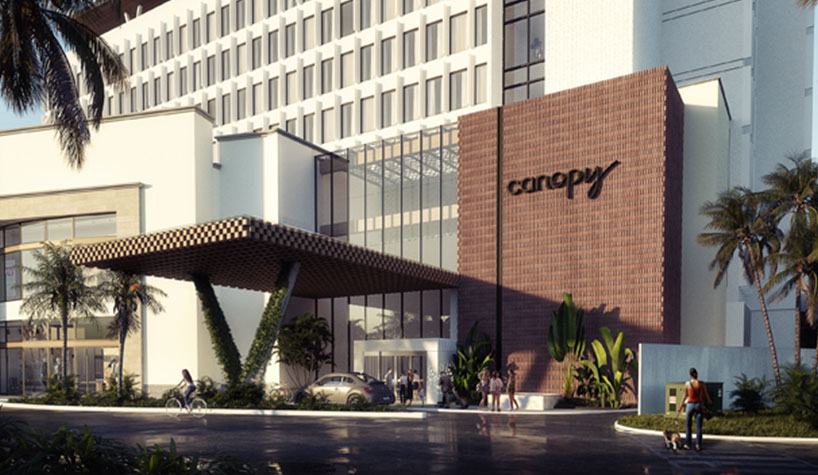 MCLEAN, VA—In its 100th year, Hilton revealed it is on track to celebrate the 100th hotel milestone in Mexico by 2022. With several new deals this year and others in the works, Hilton plans to open approximately 10 hotels per year over the next three years, adding 30 new properties and more than 4,500 rooms to its existing portfolio of nearly 70 hotels in Mexico—the country with one of Hilton’s largest portfolios.

With seven of Hilton’s brands present in the country and 10 brands represented in its development pipeline, Hilton is further strengthening its portfolio across Mexico with brands spanning from focused-service and all-suites to full-service and luxury.

All-suites and focused-service pipeline highlights include:

Hampton Inn by Hilton Culiacan: slated for early 2022 with 120 rooms.

Full-service and luxury pipeline highlights include:

Canopy by Hilton Cancun La Isla: represents the lifestyle brand’s first in Mexico and is slated to open in December 2019 with 175 rooms.

Conrad Playa Mita: scheduled to open its doors in early 2020 with 324 rooms.

Waldorf Astoria Cancun and Hilton Cancun Resort: planned for 2021 with a collective 906 rooms.

All hotels will form part of Hilton Honors, the guest-loyalty program for Hilton’s 17 distinct hotel brands. Members who book directly have access to instant benefits, including a flexible payment slider that allows members to choose nearly any combination of points and money to book a stay, an exclusive member discount, free standard WiFi and access to the Hilton Honors mobile app.

Hilton currently has a portfolio of nearly 150 hotels and resorts open and welcoming travelers in 24 countries across the Caribbean and Latin America, and currently has a robust development pipeline of nearly 90 hotels throughout the region.

Radisson Hotel Group on track to reach 50 hotels in North Africa by 2025 Radisson Hotel Group has signed nine hotels in North Africa to date this year. This has…
JW Marriott Brand Opens 100th Property; More U.S. Debuts NATIONAL REPORT—Recent openings in the U.S. include the 100th property for the JW Marriott brand, as…
Curio Collection’s 100th property opens on Chicago's Navy Pier Sable at Navy Pier, which marks the 100th property milestone for Curio Collection by Hilton, has…
Hilton on Track to Open Most Luxury Hotels in Company History MCLEAN, VA—Hilton President/CEO Chris Nassetta revealed that the company is on track to open more luxury…