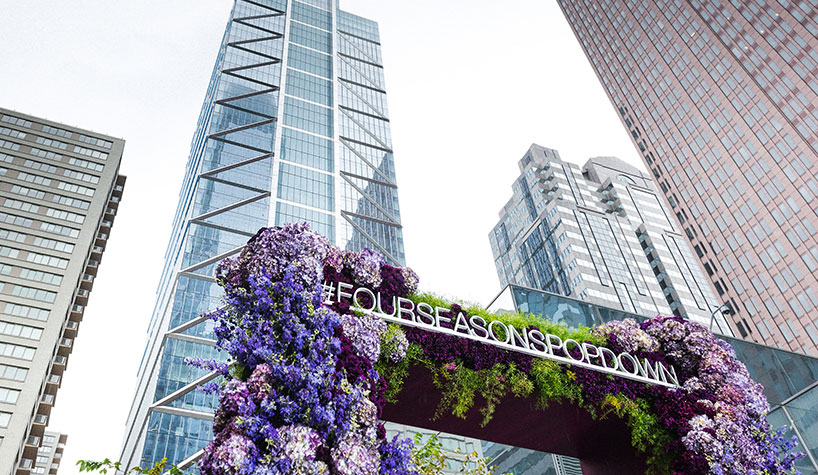 The Four Seasons Hotel Philadelphia at Comcast Center is in view above a Jeff Leatham-designed floral installation.

From high atop its perch, the Four Seasons Hotel Philadelphia at Comcast Center will take advantage of its expansive views of the city with floor-to-ceiling windows in the arrival area and guestrooms, keeping the culture and history of Philadelphia always in sight.

“The guestrooms have a very understated, contemporary and Zen-like feel with a lot of neutral colors and 11-ft. ceilings. We have this beautiful local birch that is the predominant millwork and stands as the artwork in the room,” said Ben Shank, GM of Four Seasons Hotel Philadelphia at Comcast Center, who started his career in hospitality nearly two decades ago at the original Four Seasons in Philadelphia, which the company operated from 1983 to 2015.

Being part of the Comcast Technology Center has its privileges, the Four Seasons guestrooms—which range in size from 350-450 sq. ft.—will be outfitted with a bespoke hospitality platform by the technology service provider.

“For guests that have Comcast and the X1 experience, it will be like the residential version but in your hotel room,” said Shank. “When you’re traveling and come to your hotel room, it’s all about convenience. The Comcast platform is voice activated. To find your favorite channel, just say it and it appears on the screen.”

Gaining access to forward-thinking technology is just one reason the Four Seasons Philadelphia closed in 2015—after 32 years of operation—with plans for a new location inside the city’s second Comcast building. And now, a new chapter is set to begin as the interior spaces begin to take shape and notable restauranteurs turn their dining concepts into reality. While many hoteliers strive to deliver a sense of place, this project is truly a love letter to Philadelphia.

This week the brand hosted a series of highly immersive events called the Four Seasons Pop Down, highlighting the artistry and imagination of the brand and its locale which culminated in a star-studded, one-night only event atop a former high school-turned-rooftop bar called BOK in the Passyunk neighborhood of South Philly.

There, masters of their craft filled the space with elaborate floral installations by celebrity florist Jeff Leatham, the artistic director of the upcoming Four Seasons Hotel Philadelphia at Comcast Center; the thumping beats of hip-hop icon and Philly native DJ Jazzy Jeff; inventive cuisine served up by Michelin-starred Chef Jean-Georges Vongrichten, who is launching a restaurant and lounge on the 59th floor; and James Beard Award-winning chef-owner Greg Vernick of Vernick Food & Drink, who will open two new F&B venues inside the Comcast Technology Center—Vernick Coffee Bar and Vernick Fish.

“Philadelphia is and always will be my home. It’s such an honor to be partnered with the Four Seasons in this building, in Philadelphia. It’s a ‘pinch me’ moment,” said Vernick. “This is so amazing for our city.”

For more complete coverage of the Four Seasons Hotel Philadelphia at Comcast Center, check out the Oct. 21 edition of Hotel Business.

HB on the Scene: Leaders discuss return of travel at NYU NEW YORK—The second day of the 43rd Annual NYU International Hospitality Industry Investment Conference at the…
HB ON THE SCENE: Wyndham celebrates global growth, new prototypes LAS VEGAS—Wyndham Hotels & Resorts celebrated its growth and introduced new prototypes for some of its…
HB on the scene: BLLA Conference celebrates boutique hospitality Nearly 200 attendees came together at The Plaza Hotel
Four Seasons plots '22 growth The company has four opening planned for this year