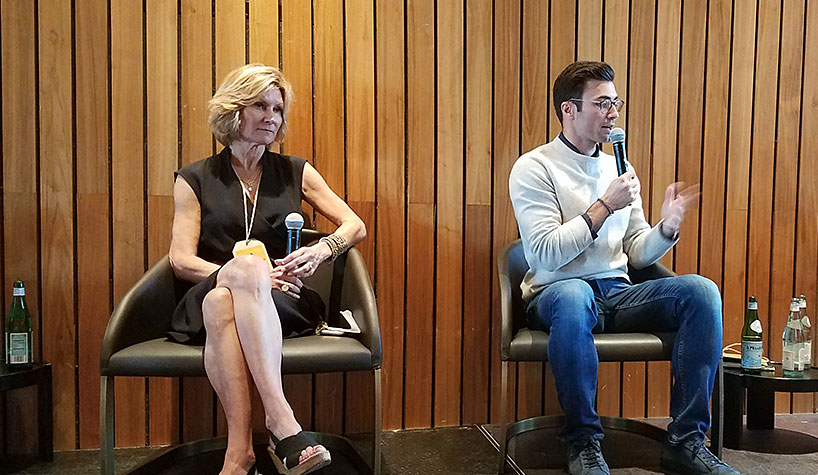 Annbeth Eschbach, founder of Exhale and now president of KindBody, and Alex Shashou, co-founder/president, Alice, were among several entrepreneurs who discussed their success at Indie Cultivate: A Start-up Pitch Event.

“We are here exploring start-ups,” said Andrew Benioff, founder/chairman, Independent Lodging Congress (ILC). “This is the first time we are exploring an event like this. We are very excited to learn what is going on and who the new companies are and how they are expanding travel, lifestyle and hospitality.”

Part of the event’s agenda involved two sessions of entrepreneurs pitching their start-up concepts to a panel of hotel industry executives, similar to the popular Shark Tank television show.

In addition to the pitch sessions, several entrepreneurs spoke about their journeys to success in hospitality. During “From Vision to Company: Founders on Inspiration, Funding & More,” Alex Shashou, co-founder/president, Alice, was asked whether the industry was viable for disruption, especially in the technology area.

“We are probably the least digitalized industry you can think of,” he said. “We are below government, we are below healthcare, we are below mining—and we are one of the largest industries in the world. At the same time, we are not really ready for disruption. What I mean by that is hoteliers don’t know how to buy and use technology; it is really new to them. It is really fragmented ownership. At the same time, while we might be ripe for it, you have seen very few examples for disruption in the hotel space. Specifically, for the most part, they are still running as they did 20 years ago. That is starting to change, and I think if you are really well funded and you can stick it out, for around five years, I think there is a huge opportunity.”

Annbeth Eschbach, founder of Exhale and now president of Kindbody, a women’s healthcare start-up, spoke on how things have changed since she launched Exhale 17 years ago, and working with Kindbody now. “I am a start-up person; I think we all have certain DNA, and I knew that I wanted to grow and build something again,” she said. “What I didn’t know when I was being recruited was how different that rocket ship is when you are venture-backed and when it is a technology-first company in this day and age. Seventeen years ago, [with a] private-equity-funded, bricks-and-mortar business, everything was about scaling and profitability, and I became an incredibly disciplined person after 17 years.”

She continued, “Today, it has been three months on a very different rocket ship; I have my seatbelt on. It is all about growth, but I am also old and wise and have had a lot of bumps, and it is pretty fun to be able to bring that wisdom into building something again from vapor and vision to reality because every time you build something, you want to be building something that is sustainable. Even if you are growing like crazy and on that rocket ship and focused only on the top line, you still need structure and you still need sanity and you need to be able to translate vision into roadmaps so that good people can thrive.”

Indie Cultivate is one of three Independent Lodging Congress events in 2019. Indie Confab: Miami was held this past February and connected creative provocateurs and disruptors from Miami’s hotels, food & beverage, design and finance worlds. From Oct. 16-17, the annual Indie Congress will take place in downtown Los Angeles.