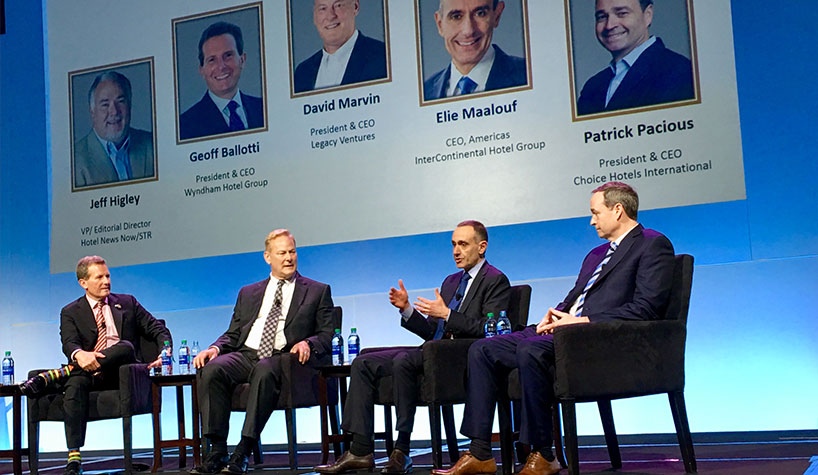 ATLANTA—There was cause for celebration at the annual Hunter Hotel Conference, held here at the Atlanta Marriott Marquis, as organizers and attendees of the national owners’ investment event marked its 30th anniversary.

The festive tone of the day also brought moments of laughter as Wyndham Hotel Group President/CEO Geoff Ballotti—referring to the company’s in-progress acquisition of the La Quinta franchise and management business for roughly $1.95 billion—handed out La Quinta-branded “power” socks during the Presidents’ Panel to fellow speakers on stage. He was beaming with pride.

“We’re very excited to have acquired La Quinta. It is our 21st brand and we’re all heading out to San Diego in a few days [for the conference]. And the big news today is that Raj Trivedi [EVP and chief development officer at La Quinta] has just signed his offer letter to be the La Quinta brand president. In Raj, we trust,” said Ballotti. “David Wilner [SVP of development at La Quinta] and the sales team will be joining the Wyndham Hotel Group as well.”

When asked what made the brand attractive, Ballotti touted La Quinta as consistent and one that franchisees love.

“Eighty-five percent of La Quinta franchises score four stars or above on TripAdvisor, and that’s an impressive stat. It’s a brand that we know David Wilner and his development team will continue to grow. It’s a great deal for our shareholders,” said Ballotti. “When you look at why scale matters… it’s never been more important. Small companies can’t continue to do it on their own when it comes to technology and when it comes to systems. When you look at the duplicative costs and the synergies that are out there… it’s a great value for our shareholders.”

The conversation moved from this one particular brand to the question of brand proliferation. How much is too many for a franchisor?

“When you look at a certain market, what’s the percentage of inventory that’s out there that’s actually sitting on one hotel platform? When moving into a market with a new brand, how many additional Choice hotels are in that market? Does it make sense for us to add another brand in that marketplace? We’re sitting at 12 brands today and we don’t see a lot of market saturation where we are, but there are opportunities that if you do get too big, and you’re at 30 or 40 brands, you start acting like an OTA,” he said.

Elie Maalouf, CEO, Americas, InterContinental Hotels Group (IHG), added, “You’ve got to be able to have the resources to dedicate the right energy and the right discipline to differentiate each brand and keep it meaningful. The people who will decide if the brands are successful are out here in the audience. If we create brands that are relevant to guests and have good ROIs, they will grow and be successful… I’m less concerned about whether the industry’s got too many brands; I’m more concerned whether we have the brands that can take the greatest market share.”

Turning to talk about the guest experience, David Marvin, president/CEO of Legacy Ventures, said it’s been a key focus in his business.

While more people are traveling across the board, it’s the 55 and older crowd that is leading the pack. They represent the greatest share of households (50%) and they’re spending, according to research shared from Tourism Economics.

As hoteliers talked positively about the strength of the economy, the Federal Reserve hiked interest rates from 1.5% to 1.75%—the highest level since 2008—and there are at least two more increases forecast.