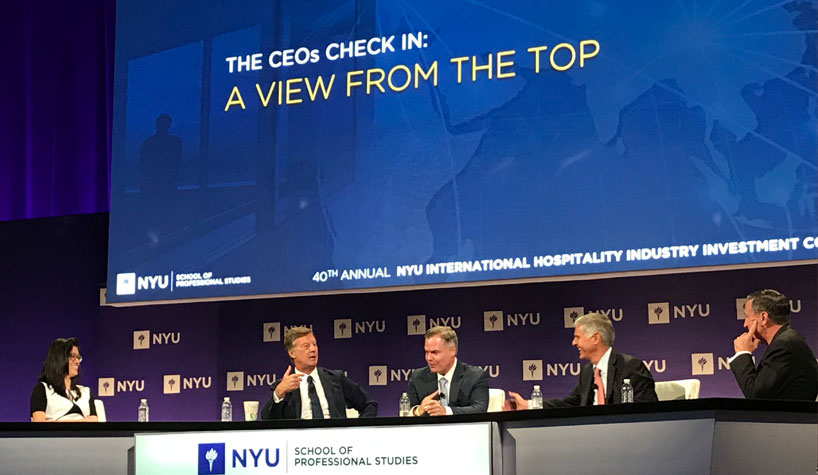 NEW YORK—Hotel executives once again converged at New York Marriott Marquis for the NYU International Hospitality Industry Investment Conference to discuss industry issues, challenges and opportunities. While many of the insights from the main stage were relatively positive, there were still some key concerns among top leaders.

“Reflecting back over the many years of the conference, it’s remarkable how the business of hotels has changed,” said Jonathan M. Tisch, chairman and CEO of Loews Hotels & Co and conference chair. “It is more sophisticated, complicated, and competitive, with technology rapidly impacting all aspects. What hasn’t changed is the hotel business. At its core, it’s still about taking care of its people while they are traveling and making them feel safe and secure. It’s about treating people well. It’s about hospitality.”

On his first point, he claimed many leaders in the industry right now feel America’s message to the world is not very welcoming. The country’s share of global long-haul travel has decreased over the past few years, from 13.6% in 2015 to 11.9% in 2017. Because of this, the industry has missed out on 7.4 million international visitors; $32 billion in spending and opportunity; and 100,00 additional jobs, Tisch said.

On security: “Safety must remain our number one priority,” he said. For him, security policies must be smart, secure, efficient and effective. Some of these programs include TSA Precheck, the Visa Waiver Program and more. He expects technological advances will assist with keeping travelers safe, including facial recognition and e-Passports.

There are still infrastructure issues that need to be addressed. Tisch noted how state governments are moving forward without the federal government’s help. Even though there’s been movement at the state level, he stressed the importance of having federal leadership and investment.

To begin tackling the issue of overcrowding in cities, he believes the industry needs to get travelers off the beaten path, identify areas for infrastructure and work with leaders. “Overcrowding is an unattended consequence of the global travel boom and it won’t resolve itself,” he said. “As an industry we have the responsibility to partner with communities and grow the communities.”

The following panel discussed where the industry is on the government and policymaking front. As expected, one of the issues the panel discussed was short-term rental. Katherine Lugar, president and CEO of American Hotel & Lodging Association (AHLA), framed the topic as the industry striving for a level playing field. She pointed to the following: The majority of Airbnb’s business comes from its full-time commercial business, which is also the fastest growing part of Airbnb. Lugar dismissed the idea of Airbnb being just a company where the average individual is renting out a place for pay.

The lodging industry is no longer the only voice on the short-term rental issue. According to AHLA’s CEO, there are many other advocacy groups now taking part of this conversation, including neighborhood groups and affordable housing advocates.

Arne Sorenson, president and CEO of Marriott International, pointed out tax reform’s positive impact on the American business community. The trade front, however, is “quite worrisome,” with the uncertainty.

Technology made its way into the discussion, particularly with regard to competition. Hilton’s CEO stressed the importance of remaining a people company at the core: “People serving people—that’s what differentiates us,” he said. Sorenson, on the other hand, declared war.

In his view, the hospitality industry is in a “long-term war” with who owns the customer. Hospitality companies are no longer just competing against each other; they’re now in battle with technology companies, like Google and Amazon. The disruptors out in the technology market are trying to take customers away from hotel groups by capturing user profiles and owning them. To combat these companies, he believes the lodging industry needs to monetize these relationships and figure out ways to deliver value by leveraging the available data out there.

Speaking on the same topic, Sébastien M. Bazin, chairman and CEO of AccorHotels, pointed out how Google and Amazon have never met the guest—that’s where he believes the advantage lies. For example, hoteliers can input data on guests while they’re interacting with them, the tech companies cannot. For him, it’s about the hotelier’s guest connection.

On China, there’s an economic opportunity to be made, Sorenson said. He believes government officials need to make it easier for the Chinese to get to the United States, pointing out how these travelers are intimated by the process.

A REIT panel discussed another trending topic in the industry—brand consolidation, which the panelists didn’t seem too opposed to. Michael D. Bluhm, CFO and EVP of Host Hotels & Resorts, spoke highly of Marriott’s acquisition of Starwood, noting the importance of the deal’s proof of scale and value creation.

Thomas J. Baltimore Jr., chairman, president and CEO of Park Hotels & Resorts, said, “Continued consolidation makes sense.” In his opinion, it’s a two-horse race in the brands market, and those two horses are Hilton and Marriott, when you look at global sales, global reservations, loyalty program size and their continued focus on leveraging digital.

Statistically speaking, not much has changed since last year, noted Stephen Rushmore Jr., president and CEO of HVS. The outlook for the next two years includes the following: supply is expected to slow down due to increasing development and land costs; cap rates will increase moderately, as will interest rates; financial conditions will remain positive, with lots of capital available; and transactions are robust.

“Overall, it’s a healthy time to invest in hotels,” he said.