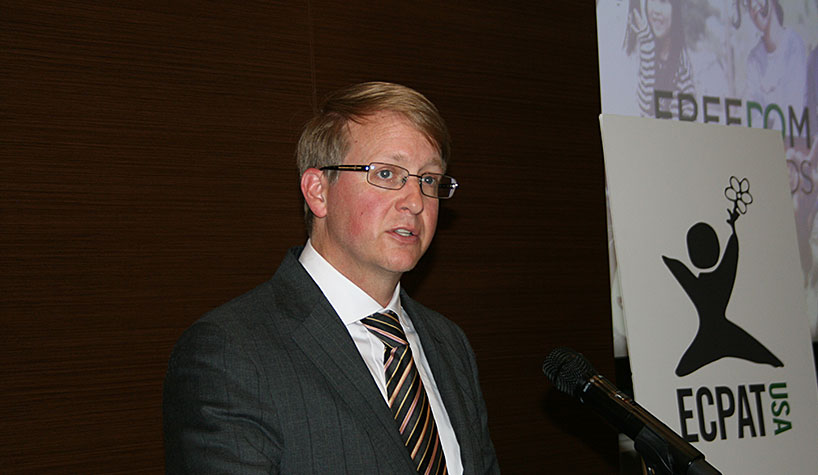 NEW YORK—ECPAT-USA, an organization seeking to end the commercial, sexual exploitation of children through awareness, advocacy, policy and legislation, honored several leaders in the fight to end sex trafficking at its Freedom Awards gala here.

Among honorees at the event was Arne M. Sorenson, president/CEO of Marriott International, who received the organization’s visionary award.

“We are immensely proud to support ECPAT-USA and to take a stand against human trafficking and child sexual exploitation,” said Sorenson in a written statement. “Trained on the signs of human trafficking and empowered to say something if they see something. Marriott associates are passionate about making a difference in this fight. Child sexual exploitation is a horrifying daily tragedy that no one can afford to ignore—and the hospitality and tourism industry has a unique opportunity to do something about it.”

Sorenson was unable to appear at the event, but accepting the award on his behalf was David Marriott, president, U.S. full Service managed at Marriott International.

“[Sorenson] is absolutely thrilled by this recognition and is equally excited to be only the second CEO to receive this tremendous award,” said Marriott. “Human trafficking is a global problem that negatively impacts people and our communities, destroying lives and families. We recognize that hotels are being exploited for the purposes of human trafficking and that business has an important role to play on this horrendous issue. Within the past 2 years, our company has trained nearly 600,000 associates on property.”

Other awards and recipients at the event were:

Smolenski, one of the founders of the organization, has been working in the field of children’s rights for more than 25 years. At ECPAT-USA, she oversaw the development of the first research project on child trafficking to New York City and two other research projects about commercial sexual exploitation of children.

Spagnuolo oversees more than 20 different hotel properties across New York, New Jersey and Connecticut. He and his team of 38 safety and security professionals are charged with keeping thousands of guests and associates safe every single day, and Spagnuolo has organized countless trainings for staff on security issues—including how to identify and best respond to instances of suspected trafficking.

Delta Flight Products employees Jett Jeffery and Glen Logan were at lunch at a McDonald’s when two girls walked in the restaurant who looked completely out of place. Around 15 or 16 years old, the girls were dressed inappropriately for the area. The man with them looked much older, and the girls were timid around him. Both had recently received anti-trafficking training from Delta, and everything about the scene they were witnessing that day at McDonald’s seemed to line up with the indicators of potential instances of trafficking that they had learned about. The two felt they couldn’t just walk away from the situation. They decided to report the incident to local law enforcement, who handled the situation appropriately.

Both are leaders in their communities, leading the student anti-trafficking groups at their schools.