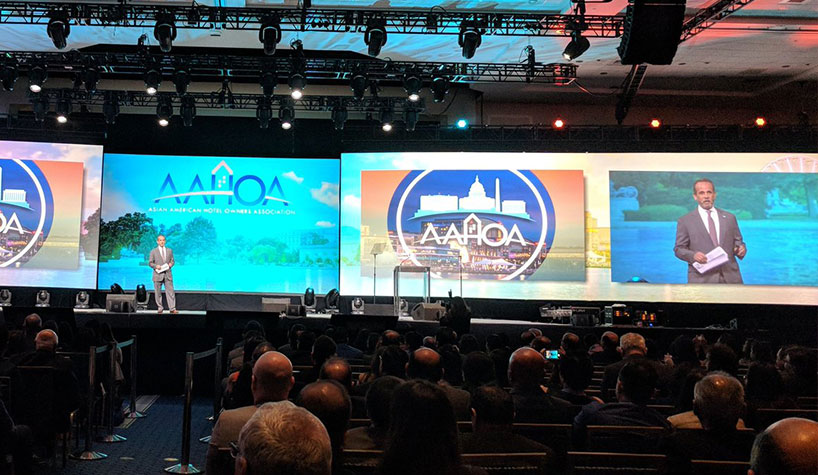 After presentations from the AAHOA leadership about the association’s accomplishments in the last year, including victories on U.S. tax reform and finishing 2017 with a record 17,753 members—40% of whom are lifetime members—attendees heard from the CEOs of seven hotel companies, as well as from NFL legend Jimmy Johnson, on their thoughts on leadership.

Organizers of this year’s event encouraged the CEOs to go “off the cuff,” so to speak. Straight talk, no filters. They were all given five minutes and free reign to discuss any topic related to leadership. David Kong, CEO of Best Western of Hotels & Resorts, said, “What we want to look for are people who can think into the future, people who think like disrupters.”

Kong used the example of the Nathan’s Famous Hot Dog Eating Contest to illustrate what he means. For the first 80 years of the contest, the total hot dogs eaten in the time limit remained relatively the same, until Takeru Kobayashi changed his thought process from, ‘How do I eat more hot dogs?’ to ‘How do I make hot dogs easier to eat?’ By adjusting his mindset, he was able to double the previous record—and accomplish his goal.

Trump Hotels CEO Eric Danziger spoke of a leader he admired: President John F. Kennedy, whom he referred to as “a man who was driven to move the country forward, a man who believed in the future, in finding a way to make the future a better place for his kids and everyone else’s.”

He pointed to the former president’s directive that the U.S. would put a man on the Moon by the end of that decade, “not because it is easy, but because it is hard. For this leader to say, ‘I want to go from here to there, and then create the inspiration and the resources and the vision and excitement for the entire country to get behind that,” led to the accomplishment of that goal.

Radisson Hotel Group CEO John Kidd spoke of the importance of the team. “If a company wants to outstrip its competitors, it needs to influence not only how people work, but more importantly, how they work better together.”

Keith Cline, president/CEO La Quinta Inns and Suites, shared the story of a supervisor he had early on his career and what he believes are the qualities of a good leader. “I believe that the best leaders are stable. They are emotionally aware. They have self control. They understand how their actions affect the people around them, the organization and their business,” he said.

My Place Hotels CEO Ryan Rivett is the third generation of his family in the company. He said that he wanted to be a leader, just like his grandfather. “I was going to measure my success by how well I could implement the leadership characteristics he showed me into my leadership style. As I started out my career, I tried to implement them directly, and work the same way he did, and I figured out that I was wrong,” he said. “I recognized that I had to develop my own leadership style…by understanding what I did best.”

Pat Pacious, CEO of Choice Hotels International, spoke of the one leadership trait he looks for from his executives: a growth mindset. “I consider this to be the most important quality a member of my executive team can possess, because those with a growth mindset do the most to maximize the return on investment for our owners,” he said.

Talking about the traits seen in leaders he’s dealt with his entire career, Hyatt Hotels Corporation CEO Mark Hoplamazian said, “The leaders I was thinking about are intensely curious and understand the power of listening. They lead and set goals using a compass, not a map. The third thing that they do consistently is practice empathy.”

AAHOA Reschedules 2021 Convention & Trade Show ATLANTA—The 2021 AAHOA Convention & Trade Show is being rescheduled to Aug. 3-6. It will still…
AAHOA Names Speakers for 2020 Convention & Trade Show ATLANTA—AAHOA has released the list of speakers scheduled to address the association’s membership during the 2020…
HB on the Scene: CEOs talk labor, tech at NYU Conference NEW YORK—As the hospitality industry continues its march back from the COVID-19 pandemic, the 43rd Annual…
HB on the Scene at the NABHOOD Summit: CEOs talk recovery, lessons learned During the second day of the National Association of Black Hotel Owners, Operators and Developers’ (NABHOOD)…