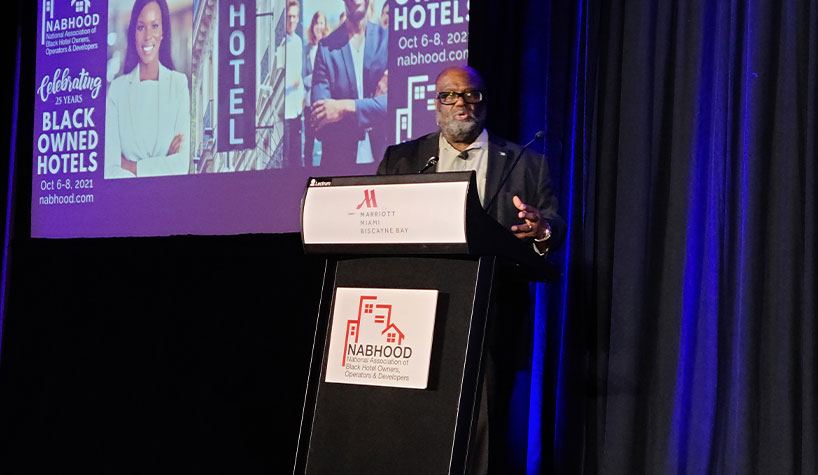 MIAMI—On first day of The National Association of Black Hotel Owners, Operators and Developers’ (NABHOOD) 25th annual International African-American Hotel Ownership & Investment Summit & Trade Show, held at the Miami Marriott Biscayne Bay, the general opening session was all about making sure the next generation of African-American hoteliers have all the tools to succeed.

“Diversity is about ownership and ownership is the only defining ingredient where you have an opportunity to say to the people that you are with, ‘You are going to do this,’” said Andy Ingraham, founder/president/CEO, NABHOOD, and a member of the Hotel Business Advisory Board, who then discussed how his organization hopes to be for African-Americans what AAHOA is for Asian-Americans.

Jerry C. Butler, chairman, Butler Investment Group, then took to the stage to talk about what NABHOOD does for young African-American hoteliers.

“Andy and NABHOOD both are very intentional about giving back, and if we don’t give back and pay it forward as a generation of hopefully successful hotel investors and entrepreneurs, we won’t have anyone left to carry the mantle for us,” he said. “It’s almost like a relay, and we’re at the stage where, as Andy, NABHOOD and all of us continue to pass that baton to take us forward, we become better and better at wealth accumulation and penetrating a sector of society that’s a really great investment sector that, quite frankly, African-American investors have not played a part in.”

He added, “One day, this room will be filled with the next generation of people who didn’t have to work as hard as we had to work, and they looked like us they’re comfortable, they’re secure and they’ll teach another generation behind us. So, that’s how we go backwards to pay forward, and we grow and we evolve.”

He told the crowd about his family’s humble beginnings as hotel owners: “My parents came out here and stayed in somebody else’s house, borrowed $5,000 here, $10,000 and $15,000 there, put the funds together and bought a motel, and then it went into something bigger and better.”

Dr. Jay S. Patel, chairman, LHS Companies, who is also a NABHOOD cofounder and AAHOA member, pointed out the younger generation can learn from what its elders went through.

“We’ve already made all the mistakes in three generations,” he said. “So, you can learn from us, and none of us are going to give you any bad advice; we’re going to give you the goods. So, the path to following the AAHOA model is much easier than it was for us. The first generation struggled with the independent mom and pops, then the second generation transitioned into the franchise industry and now we get into the high-end hotels, but through those three decades there were a lot of growing pains. And those are the teachings that we bring to platforms like this.”

For more coverage of the summit, see the Nov. 15 issue of Hotel Business.