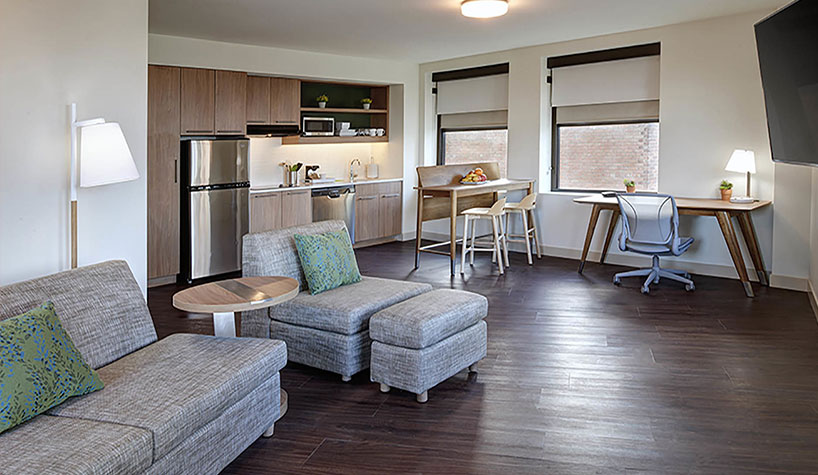 Element Detroit at the Metropolitan

NATIONAL REPORT—The country’s Heartland region is seeing some action. Brand debuts, boutique openings and farm properties are all part of the mix. Here’s a closer look:

Element Hotels, along with Detroit-based Roxbury Group and Means Group, has opened the Element Detroit at the Metropolitan, marking the debut of the brand in Michigan.

The hotel has 110 studio and one-bedroom guestrooms, a rooftop bar and patio, more than 5,000 sq. ft. of meeting space, including three event rooms for conferences and gatherings, and 7,000 sq. ft. of ground floor and lower level retail space.

In addition, The Monarch Club will be the first of three food and beverage venues to open in the building, and is slated to debut in the first quarter of this year. The property is being managed by Azul Hospitality of San Diego.

Aparium Hotel Group has opened the Cyrus Hotel in downtown Topeka, KS. Cyrus Hotel is the first boutique lifestyle hotel in Topeka, according to the company. It blends a historic building with a modern new-build tower to culminate in the eight-story, 109-room property.

The hotel has food and beverage options, two ballrooms with flexible meeting and event spaces, a business center and a fitness center. The hotel is owned and was developed by Topeka-based AIM Strategies.

TownePlace Suites by Marriott St. Louis Edwardsville is open in Edwardsville, IL. The new hotel operates as a Marriott franchise, owned by R.L.P. Development Company Inc. of Edwardsville, IL, and managed by General Hotels Corporation of Indianapolis, IN.

Fair Oaks Farms opened this month its first overnight accommodations, the 99-room Fairfield by Marriott, Fair Oaks Farms in Fair Oaks, IN. The hotel has 31 suites, 11 of which are custom designed by Fair Oaks Farms. The hotel also has a great room, a 2,100 sq.-ft.-patio and both indoor and outdoor fireplaces.