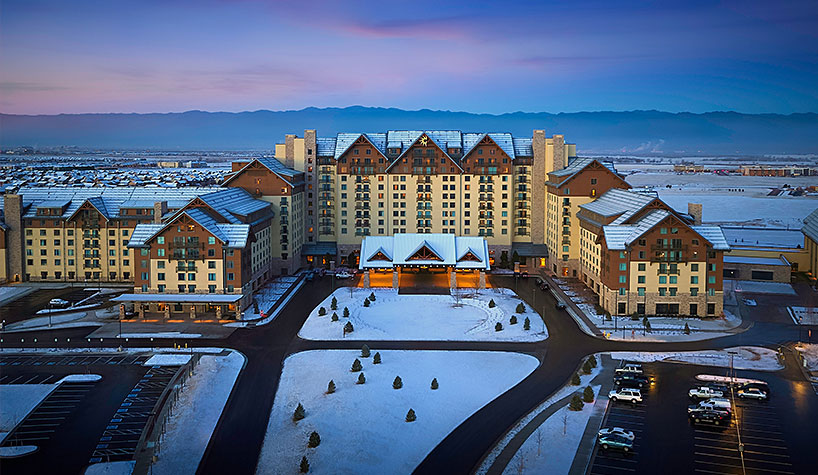 NATIONAL REPORT—Marriott International Inc. is growing its footprint in the U.S., including the opening of the fifth Gaylord Hotel property.

Gaylord Rockies Resort & Convention Center in Aurora, CO, officially opened its doors as the largest combined resort and convention center in the state. The resort is the fifth Gaylord Hotels property and one of the largest resorts in the world to debut under the Marriott International brand this year.

The property has 1,501 rooms, 485,000 sq. ft. of convention center space and an extensive indoor/outdoor water park on an 85-acre site. Setting it apart from other similarly sized resorts, it is built from the ground up to authentically capture a local sense of place, according to the company. The resort’s interior design and decor is modeled after aspects iconic to Colorado—everything from cascading waterfalls over boulders and local nature artwork to native landscaping, and even elevators designed to look like old mine shafts, paying tribute to Colorado’s gold rush history.

The local feel is carried over into guestrooms, with aspen tree-inspired carpets, lumberjack plaid print pillows, and hiking and camping maps in the closets. In the Convention Center, Colorado details are sprinkled throughout, including elements that represent ski tracks, snow drifts and snowflakes. Local food and beverage partnerships are also an integral part of resort, including a collaboration with Dry Dock Brewing Co., a brewery in Aurora, which offers two exclusive resort-branded brews.

Four Points by Sheraton Raleigh Arena recently made its debut in North Carolina.

The 111-suite hotel will operate as a Marriott franchise, owned and managed by Briad Lodging Group LLC, the hotel division of Livingston, NJ-based The Briad Group.

The new property offers studio and one-bedroom suites with fully equipped kitchens, as well as separate living/working and sleeping areas.

The 88-suite hotel will operate as a Marriott franchise, owned and managed by Honest Hospitality #2 LLC.

Virginia Beach Marriott Debuts & Other Openings NATIONAL REPORT—A pair of hotels have recently opened in Cincinnati and Virginia Beach, while another in…
Spot X debuts in Orlando; more openings… Hotels are making their debuts across North America, including the latest addition to Red Roof’s The…
Disney's Riviera Resort Debuts; More Openings in FL NATIONAL REPORT—From magical moments at a Disney resort to revitalization projects on Collins Ave. in Miami,…
50th avid debuts; more openings Openings in FL, GA and DC