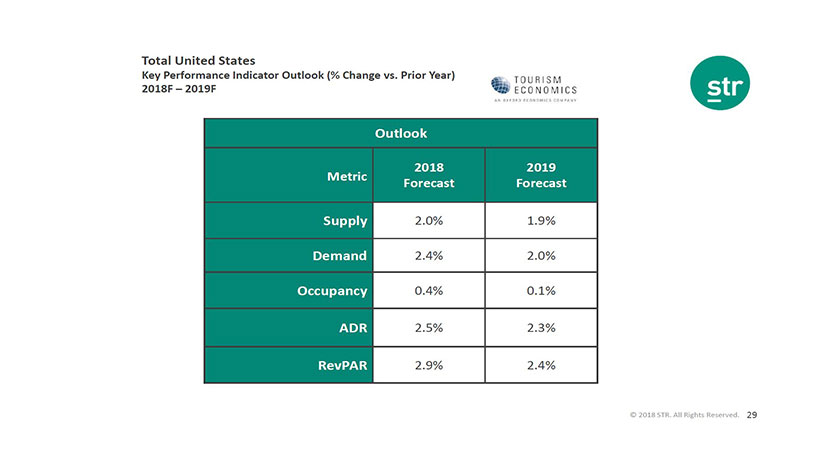 The U.S. hotel industry is set to continue on record-breaking track. Source: STR

“RevPAR growth exceeded expectations during the first quarter of the year and lifted our projections for 2018 as a whole,” said Amanda Hite, STR’s president/CEO. “However, because of the post-hurricane demand boost in 2017, we expect year-over-year occupancy declines during Q4 that will extend into 2019 with that year’s total overall performance affected.”

She continued, “Regardless, industry fundamentals continue at record levels supported by strong demand from both the business and leisure sectors. Solid economic indicators and a room construction total that represents just 3.6% of existing supply certainly help marketplace conditions as well.”

The luxury chain scale segment is likely to report the largest increases in occupancy (+0.9%), ADR (+2.9%) and RevPAR (+3.8%). While all segments should report increases for 2018, the lowest rate of RevPAR growth is projected in the upscale segment (+1.8%).

All but one top 25 market (Houston) is projected to report RevPAR growth for the year. While most markets are projected in the 0% to +5% range, Minneapolis/St. Paul, Minnesota-Wisconsin, is the only U.S. top 25 market expected to see growth in the range of +5% and +10%.

The highest overall rate of RevPAR growth is expected in the upper-upscale segment (+2.3%), while the lowest is projected among upscale (+1.9%) and midscale (+1.9%) chains.

Different from this year, Minneapolis is the lone top 25 market projected to report a negative RevPAR percent change for the year. The remaining 24 markets are expected to post growth between 0% and 5%.

JLL: REIT M&A boom continues with record-breaking year Outperforming strong expectations and driven both by strategic and private capital, 2021 has already been a…
Hot Topics—Breaking the Barriers: Creating an Industry for All This past year has proven to be a pivotal one in how American society addresses racism…
Kalibri Labs: 2020 Group Cancellations Continue to Grow & More Industry Trends NATIONAL REPORT—Kalibri Labs has released updated data from its COVID-19 Industry Health Dashboard, which is designed…
CBRE Adjusts Hotel Industry Forecast in Response to COVID Spikes, Vaccines DALLAS—The recent surge in COVID-19 infections has dampened expectations for U.S. hotel performance through the first…