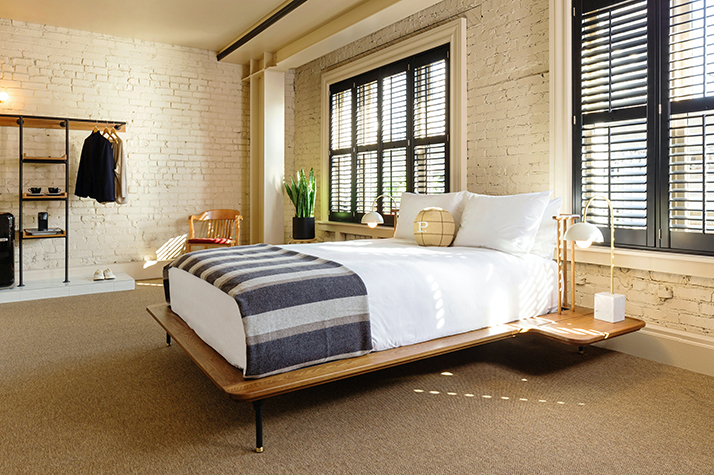 NATIONAL REPORT—New hotels have opened out west. Here’s a look at some of them:

Palihotel San Francisco
Palihotel San Francisco has opened as the latest property for independent hotel brand Palisociety. Located near Union Square, it is a renovation of a century-old, Mission and Spanish Revival-style building that has been home to several hotels since its development, including the Colonial Hotel in the 1920s, the Hotel Navarre in the 1930s, the Navarre Guest House in the 1950s and, most recently, the Mystic Hotel.

Designed by Portland-based developer and design builder Mortenson, in partnership with Sera Architects, Hyatt Centric Downtown Portland features the “Portland Penny” in each in-room closet, paying homage to the 1835 American copper penny that was used in an 1845 coin toss to name the new town of Portland. Each suite includes hand-stitched life-size chicken footstools by The City Girl Farm.

The pet-friendly property also includes a 24-hour fitness center and three meeting spaces, including the 1,368-sq.-ft. Pettygrove Room, which can be divided in half to accommodate smaller groups; and 428-sq.-ft. technology-driven Lovejoy boardroom, named after one of Portland’s founders.

Both properties feature multiple suite layouts offering an in-room kitchen with a full-size refrigerator, microwave and cooktop; an expanded lobby with a coffee station; free WiFi and guest parking; a 24-hour fitness center; and a guest laundry room.

The hotels were developed by Brookwood Hotels and are managed by Nationwide Hotel Management Company.

The four-story hotel features Courtyard’s latest room design offering hybrid zones for working, sleeping, relaxing and getting ready. It also includes the brand’s latest lobby design and the newly designed Bistro Other amenities include 1,100 sq. ft. of meeting space; an indoor swimming pool; an outdoor patio with a fire pit; a fitness center; and guest laundry.