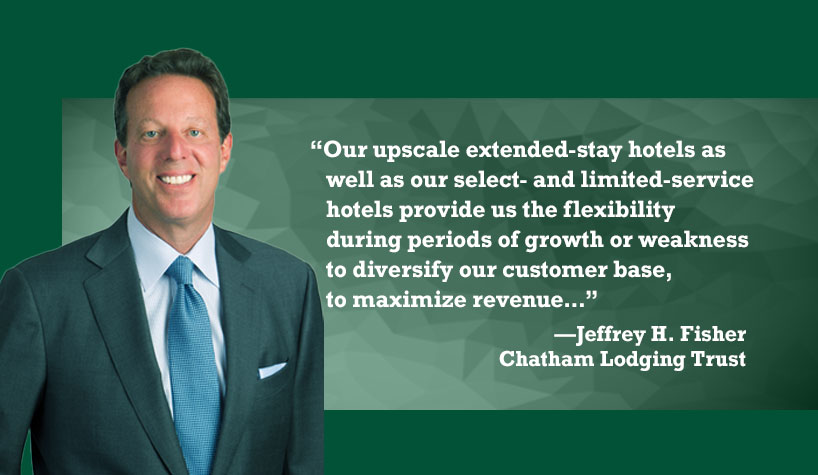 WEST PALM BEACH, FL—Chatham Lodging Trust has reported RevPAR and revenue losses in Q2 2020, but remains confident in recovery as its hotels remained open and in demand during the past few months.

“Although a dismal absolute RevPAR, the decline of 77% for our entire portfolio, not just some small subset of open hotels, is much better than most companies that have already reported RevPAR declines over 90%,” said Jeffrey H. Fisher, Chatham’s president/CEO. “I certainly believe that our outperformance is attributable to the fact that 70% of our 2019 EBITDA and 60% of our rooms are made up of extended-stay hotels. An important differentiator is that Chatham has the highest percentage of extended-stay rooms of all lodging REITs, basically double the next highest REIT, and this is often overlooked.”

Fisher added that more than 96% of Chatham’s rooms are characterized as limited-service rooms, the highest percentage among public lodging REITs. “Our upscale extended-stay hotels as well as our select- and limited-service hotels provide us the flexibility during periods of growth or weakness to diversify our customer base, to maximize revenue, and that’s exactly what our operating team has been doing,” he said.

“Companies that have already reported earnings have stated that July has been similar to June, but for us, our occupancy further increased over 400 basis points to 48% for our entire portfolio,” Fisher noted.

Chatham’s availability of suites with full kitchens has allowed first responders, government and military workers to stay at its properties, allowing the company to keep all 40 of its hotels open.

“Even as hotels have reopened over the last few months, we have sustained our outstanding RevPAR market share gains with an average RevPAR index during the second quarter of 145 compared to our 2019 RevPAR index of 118. By keeping all hotels open, we were able to book meaningful revenue and provide rooms to important long-term customers. Fortunately, we have been able to leverage those wins to capture more of the oncoming demand which allows us to better bridge the gap to recovery,” Fisher said.

Chatham and Island Hospitality have taken actions at its hotels to reduce operating costs:

“Given our portfolio attributes, we believe that we will return to 2019 revenue levels sooner than most of our lodging REIT peers. Furthermore, we are confident that once performance stabilizes, the operating model will be more profitable due to the implementation of more efficient housekeeping standards and less costly complimentary food and beverage programs,” Fisher said.

He added, “If you wanted to assume that June was where we were going to perform for the foreseeable future, our liquidity runway is 41 months, enough to get us through the end of 2023.”

Hotel Under Development & Construction Loan Executed
Chatham is developing and constructing a hotel in the Warner Center submarket of Los Angeles on a parcel of land owned by the company. The company expects the total development costs to be approximately $70 million, inclusive of land of $6.6 million. Including land, the company has incurred costs to date of approximately $30.5 million. The company self-mandated a slowing of the development activity due to restrictions related to COVID-19. In early August, the company closed on a $40 million construction loan with an affiliate of Mack Real Estate Credit Strategies L.P. The four-year loan carries an interest rate of LIBOR plus 750 basis points (subject to minimum LIBOR of 25 basis points) and is interest-only for the entirety of the loan. The interest rate spread reduces to 600 basis points once the debt yield is equal to or exceeds 9%. The loan is guaranteed by Chatham Lodging L.P.