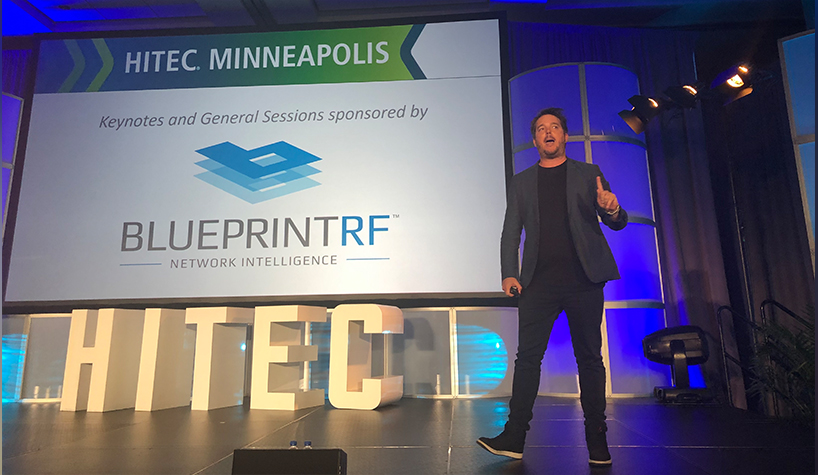 MINNEAPOLIS—For those seeking to understand how technology will shape the future, it’s not really about the tech itself, but the rapid pace of change we’ll see over the next few years. That was the perspective of Chris Riddell, global futurist and keynote speaker at HITEC Minneapolis, held here at the Minneapolis Convention Center.

“The amazing thing to me is the amount of innovation and change we will see in the next three years will shape and define the next 100 years in society in a way we’ve never, ever seen before,” he said. “All of you in the travel industry have got to be able to keep up with this new, high-speed change. It is not a technology revolution that is going to disrupt our future; it is this high-speed change that is reinventing everything we do now.”

Riddell noted that companies have been talking about how to digitize their business for years now—so much so that digital companies like Amazon have brought it around full circle, going into the physical space with the online giant’s acquisition of Whole Foods. “We’ve been talking about digital and tech and how to digitize our businesses. We are out of the digital revolution. We are now in a revolution of cognitive,” he said.

What does this mean, exactly? It’s a partnership between humanity and technology coming together. “Cognitive now will allow us to create incredible experiences, ones we could only just imagine a few years ago,” he said, noting that while consumers have a tendency to fear technology, they also feed into it.

“Technology and robots are one of the things we fear most at the moment. Why do we fear these things? The reality is it’s all about information and data,” he said. “We’re terrified about the vast amounts of information organizations have. The reality is we feed these beasts every time. We give them this information.”

Take, for example, Waze, which only functions because users input data into the app, he said.

“The problem with feeding the beast is we used to think it was cuddly, but over the last few years, the beast has become terrifying,” he said. “As these big organizations are creating chaos with data, we’ve realized the huge amount of power and disruption they can create, and it’s this now we fear more than anything. The reality is the travel industry is generating and storing and using more data than almost any other industry we have, but the reality also is that we have to create incredible value from the data. This is fundamental to gaining trust from our customers. If we don’t give phenomenal amounts of value, then this is when we start to fall into a trust crisis.”

While hoteliers are using this data to create personalized stays for guests, creating value, they also have to understand tech’s role in those experiences. “What’s happened now is we’ve had a flip in the last few years where our travelers have more powerful tech than we do, so they own the experience,” Riddell said. “They dictate the type of experience we have. This consumerization of technology has created one of the biggest flips we’ve had in humanity. In the next three years, what we [will be] doing is moving away from screens and toward a world of mixed reality and mixed experiences, blending physical and digital, and overlaying the two on top of each other.”

Riddell noted that there are four trends that will impact the future: the sharing economy, blockchain, augmented intelligence and the Internet of Things (IoT). “The most interesting one at the moment is IoT,” he said. “Everything in our lives now wants to be connected online—lights, washing machines, dishwashers, fridges, our cars. The next era of 5G that we’ve launched here in the United States is going to catapult this world of IoT over the next 12 months. With all of this data, the travel industry is now able to use this data to identify individual human beings. Up until now, we’ve been treating people as groups: Gen Y, Gen Z, they live in Arizona or California, male or female, but now, with real-time data comes real-time experiences, and we need to be real-time intelligent. This is one of the biggest challenges for us because our organizations are not built and structured to behave in real time, but this is the next wave of disruption we will see from start-ups and entrepreneurs.

“Don’t get complacent because the world is changing. We need to keep up,” Riddell said. “The thing I always look for with any of these trends is that it’s the change we need to keep looking for, not the technology trends. Look for the human change, the behavioral change.”

He also noted that companies could take a page out of Apple’s book when it comes to technology. “Apple’s innovation story has nothing to do with the device; it’s how they create experiences,” he said. “Everything they do is about driving simplicity. In the travel industry, we have so many disparate systems and the experiences are frequently so fragmented. What people now expect is simplicity at every single juncture. Apple has done this. Apple didn’t invent the tablet; Microsoft did, but no one used it apart from tech people because it was too complicated. When Apple came out with the iPad, the world got it… Simplicity is the new perfection. Don’t get distracted by the new technology, the latest gizmos. Create simplicity at every single opportunity.”

Egencia Delivers Predictions for the Future of Tech and Travel NATIONAL REPORT—What does the future hold for the travel industry? For starters, technology will continue to…
The future of hotel hygiene: What can we learn from the COP26 conference Expectations of cleanliness in hotels have changed forever. As the industry continues to bounce back from…
Hotel Companies Join Forces with Tech Providers INTERNATIONAL REPORT—Hotel companies are partnering with technology providers for operational efficiency and guest convenience. Here’s a…
Radisson Hotel Group, Accor implement tech platforms Radisson Hotel Group and Accor have implemented new technology platforms at their international properties. Radisson Hotel…