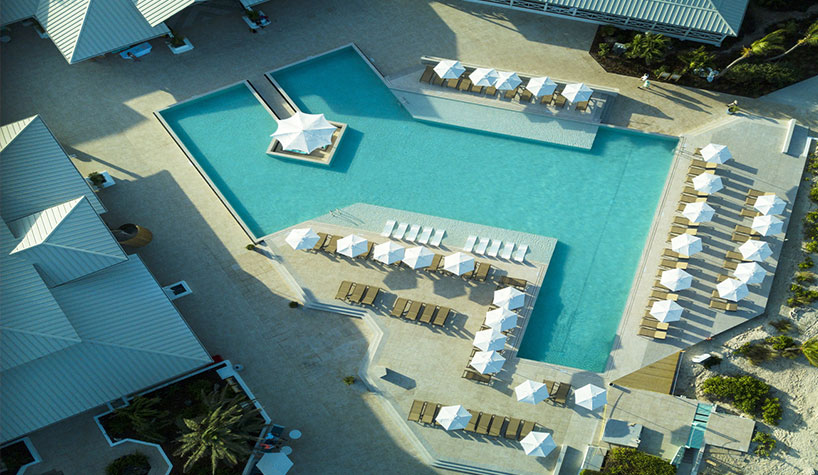 MIAMI—Club Med aims to open five new resorts per year, on average, over the next five years as part of its international growth strategy. The company also has plans to execute five major renovations to its current resorts each year to offer new and refreshed experiences.

Here is a look at some of the global upcoming openings, renovations and technology upgrades to some of its 70 existing properties this year:

Club Med Turkoise – Turks and Caicos recently reopened its doors in January to unveil a refreshed and redefined atmosphere. The resort will earn its fourth Trident (the company’s star rating system) as of May 1, due to its recent renovations and upcoming enhancements, including all-new deluxe-level room with balconies; a redesigned pool and reception area; a new main bar; renovated dining space with a new wine cellar; a new wellness area; and tech updates.

Club Med Cancún Yucatán – Cancún, Mexico is undergoing an expansion. Set to open in July, the Aguamarina area with accommodations and spaces dedicated to families will receive an expansion to introduce 60 new family rooms—30 Family Club rooms and 30 Family Deluxe rooms—along with a new oceanfront pool. The renovation will increase the capacity of the resort and accommodate travelers with the creation of a second resort center dedicated to families. In November 2017, the resort also completed a full renovation to all rooms and public spaces, and introduced new restaurant concepts.

Originally hosting a Club Med from 1956 to 2006, Cefalù, Sicily, will once again play host to a Club Med resort, the newest flagship resort for the Exclusive Collection: Club Med Cefalù. The resort will be the first full 5-Trident resort in Europe and will offer more than 300 rooms, three restaurants and three bars.

In China, Club Med is testing a new venture for the company: a short-vacation-style hotel concept to introduce the brand to the Chinese market as part of its strategy to expand across Asia. The Club Med Joyview project will create a number of new hotels in China over the next few years. All hotels will be within a three-hour drive from a major city in China, and feature upscale amenities and premium services.

Club Med Kani – Republic of the Maldives will soon open a new scuba-diving center and Mini Club to promote family friendly travel activities, while the overwater suites at the Manta Exclusive Collection space will undergo a refresh. The Manta section will also unveil a new welcome lounge, beach restaurant and bar lounge.

The company’s expansion plans will strengthen its presence in Asia through the creation of new resorts, develop its North American offering by breaking into a new territory, and elevate its role in the all-inclusive ski vacation sector with its plan to open a new Alpine ski resort, annually.

In Africa, Club Med is planning renovations for its Club Med La Pointe aux Canonniers resort in the Mauritius to expand the resort with 108 new rooms. Current rooms will also undergo renovations, and the resort will play host to a new spa, family pool, Zen space and a transformed specialty restaurant.

Additionally, the company plans to open a new resort in 2020 in the Le Massif de Charlevoix region. This 4-Trident resort with a 5-Trident space will be the first Club Med resort in Canada and will feature year-round activities for each season.

Beginning early in 2018, French and Italian resorts will offer “Easy Check-In” that automatically opens a property account for guests prior to arrival without requiring a stop at reception followed by “Easy Check-Out” that directly charges the credit card on file so there is no need to close out an account. Resorts will also engage guests with mobile welcomes and digital assistance throughout their stay, using a specialized bracelet that allows mobility throughout the resort and a smoother, modernized arrival.

This year, the company is installing new capabilities to the Club Med Resort App that allow guests to access information about sports, dining, activities and events. The app will now allow guests to make direct requests to the housekeeping or technical teams to save time. Guests will also have the ability to book services through the app, such as spa appointments, excursions and specialty restaurant reservations.

The company is also working with Google Street View to allow guests the chance to tour the resorts and their rooms prior to arrival. Currently, 25 resorts worldwide offer the Street View option, including Club Med Sandpiper Bay in Florida, Club Med Punta Cana in the Dominican Republic and Club Med Cancún Yucatán in Mexico. The company is working on expanding the list throughout the year.