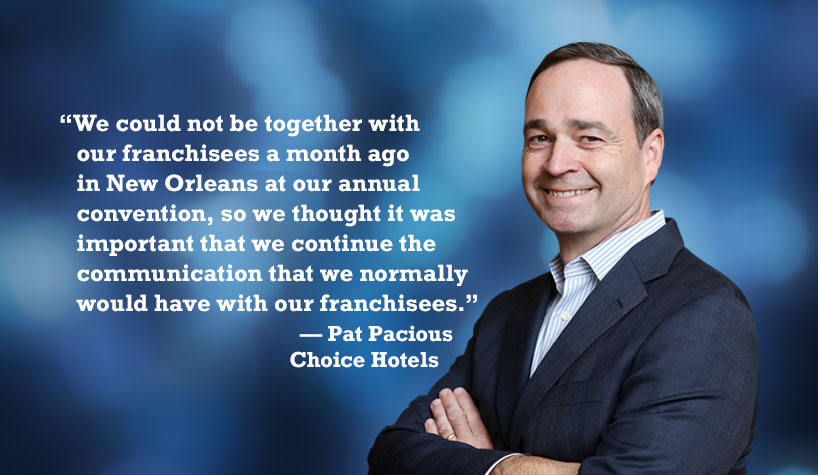 NATIONAL REPORT—With the COVID-19 pandemic preventing its franchisees from gathering for a national conference this year in New Orleans, Choice Hotels provided a virtual update on its operations.

“We could not be together with our franchisees a month ago in New Orleans at our annual convention, so we thought it was important that we continue the communication that we normally would have with our franchisees,” said Patrick Pacious, president/CEO, Choice Hotels. “Our convention gives us the opportunity to talk about the progress that our brands are making. It gives us an opportunity to celebrate the great performance of our hotels throughout the year.”

The WoodSpring Suites brand achieved an average occupancy rate of more than 70% in the month of May, making it one of the best-performing brands in the hotel industry in recent months, according to the company. This both demonstrates the brand’s ability to maintain high occupancy in difficult economic environments and further reinforces its consistently high operating margin potential for developers, building on its 2019 performance wherein its hotels achieved gross operating profits of more than 54% on average, according to the company.

The company also reported that from March 15 to the end of May, it awarded 70 new franchise agreements, with 75% of them conversions. “When we look back at the Great Recession, the Choice brands outperformed the rest of the industry with regard to unit growth, primarily driven by the conversion brands,” said Pacious. “We do expect a similar type of interest level. What we see in lodging downturns is a movement of independent hotels to branded, and also from weaker brands to stronger brands. So, Choice has traditionally benefited from that.”

Pacious highlighted the company’s Commitment to Clean protocols and how it is working to provide confidence to guests. “We know from research that the No. 1 criteria people were looking for before they feel comfortable traveling again was the question of ‘Is the room going to be clean? Is the lobby going to be clean?’” he said. “So many people consume information today more on video, so the Commitment to Clean video was something we decided would help build confidence for people who haven’t been to the hotel yet to actually see, ‘What are the housekeepers doing? What is going to be the check-in process when I arrive?’”

He continued, “It was really important to us not only to have all the protocols and highlight all the things that our professional housekeeping staff already does, but what is new and different and put it out in a visual way. In the pre-arrival emails, we are sending out a link to it and we are putting it out on social media.”

Megan Brumagim, VP, brand management, design & compliance, added, “It is important that the customers are seeing this message across their guest journey, through the [various] touchpoints…When guests are coming to our Choice Hotels properties, they can start to expect to see these things actually happening on property—whether it’s through hand-sanitizing stations in the lobby, collateral in the guestroom that tells them about the housekeeping options they have, or changes to the breakfast area that really communicate how we are putting their health and safety first.”

The company also spoke of how it will be helping its franchisees bring guests to their hotels by unveiling its new, multi-channel, national advertising campaign. Set to the tune of the classic, “On the Road Again,” the ads, created by Choice’s creative agency-of-record, North Carolina-based McKinney, will air across national markets and a diverse range of digital channels. The campaign will also encourage travelers to share their road trip adventures using the hashtag #OnTheRoadAgain across social media.