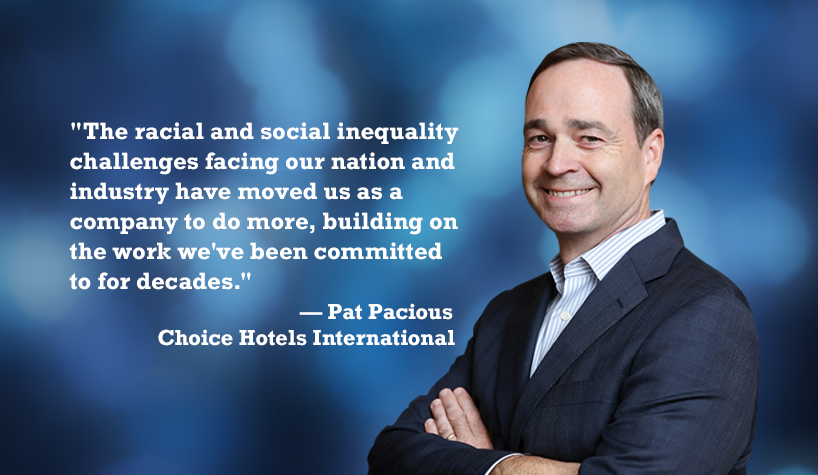 “The racial and social inequality challenges facing our nation and industry have moved us as a company to do more, building on the work we’ve been committed to for decades,” said Pat Pacious, president/CEO, Choice Hotels. “As part of our pledge to cultivate a culture of diversity, equity and belonging, we have taken steps to decisively move us forward—including creating a franchise owner’s council supporting Black and African-American hoteliers. It is our goal to provide a platform for owners to express their voices and unique experiences directly with us, and we look forward to working together with this dynamic group of leaders to advance diversity across the hospitality industry.”

CHOAAA’s mission is to provide a forum for Black and African-American hotel owners of Choice-brand hotels to engage directly with the company’s leadership and emerging markets team in the development and execution of key initiatives. This dialogue is intended to help enhance the diversity of Choice Hotels’ ownership base by increasing representation of the Black and African American community. The objectives of CHOAAA include:

“As the only lodging company with a team dedicated exclusively to growing a diverse franchisee base, we take great pride in our history of inclusion,” said John Lancaster, regional VP, franchise development and owner relationships. “However, we recognize there is always room to do more. The creation of CHOAAA is a vital step towards achieving our vision. CHOAAA will help us grow an even more diverse owner base so we can further extend the well-deserving opportunity of hotel ownership to those who have historically been less represented in the hospitality industry.”

Choice Hotels recently held its inaugural CHOAAA meeting, which included the following eight delegates as part of its initial membership:

• Robert Nesbitt: Nesbitt, who will serve as president of CHOAAA, has a background in banking and commercial real estate, and owns a Comfort Inn and Suites in Birmingham, AL. The hotel is part of the Five Points West development, which is anchored by the Birmingham CrossPlex, where hundreds of events are widely attended by spectators each year. Nesbitt led the development of the entire area.
• Frederic Washington: Washington is VP of CHOAAA, as well as managing partner of Southern Accommodations, LLC. He previously served as the U.S. Department of Housing and Urban Development lead in Florida under Presidents Bill Clinton, George W. Bush and Barack Obama, and recently signed the largest minority multi-unit franchise agreement in the history of Choice’s emerging markets franchise development program to develop six hotels across Florida.
• Chanel Grant: Part of a mother-daughter ownership group that owns multiple Tropical Smoothie Cafes as well as Hand & Stone Massage franchises, Grant, Toya Evans and Lauren Williamson of TLC Hospitality Group are currently developing a MainStay Suites and Sleep Inn dual-brand location in North Carolina.
• Zane Major: Major is director of operations for The Russell Hospitality Campus, a subsidiary of the HJ Russell Company, which is an Atlanta-based construction management, program management and development company that has been in business for more than 40 years. The HJ Russell Company has helped develop the Olympic Village and Mercedes-Benz Stadium in Atlanta, as well as the National Museum of African-American History and Culture in Washington. The company owns a Clarion hotel in Atlanta.
• Michael Ringwood: Ringwood is the designated representative for the Church of God and Saints of Christ that oversees the development team for the mixed-use BelleHarbour community, which includes a Comfort Suites. Located in Suffolk, VA, BelleHarbour is a historically significant, 40-acre area purchased in 1903 by William Saunders Crowdy, a formerly enslaved person. In subsequent years, the initial 40 acres were expanded to comprise nearly 400 acres of this mixed-use development.
• Larry Tripplett: A former NFL player for the Buffalo Bills, Indianapolis Colts and Seattle Seahawks, Tripplett owns a Comfort Suites in Glendale, AZ. Part of an entrepreneurial-minded family, Tripplett’s father, Larry Tripplett, Sr., is chairman of the Black McDonalds Owner Association.
• Dr. Andrea Williams: A board-certified otolaryngologist, Dr. Williams signed an agreement to develop a MainStay Suites and Sleep Inn dual-brand location in Rock Hill, SC, as well as a Comfort Suites in Charlotte, N.C. She owns multiple ENT practices as well as the Jerk Joint restaurant in Charlotte.
• Reggie Winfield: Founder of Winfield Properties, Winfield has more than 20 years of commercial real estate and hotel management experience. He owns a Clarion Pointe in Lafayette, LA, and a Quality Inn in Laurel, MS.

“Our hats are off to Choice for initiating the Choice Hotels Owners African American Alliance,” said Nesbitt. “I believe Choice is the only major hotel company focused on this area, and it is an honor to head this group of inaugural delegates. I expect to determine, directly from fellow African-American owners, what the barriers to growth are and to lead the group in collaborating with Choice leadership to dissolve those barriers and develop solutions. We, as owners, must capitalize on this unique opportunity.”

Choice Hotels has a long history of creating and supporting a diverse franchisee base. For nearly 15 years, the company’s emerging markets team has been dedicated to making small business ownership a reality for underrepresented minority entrepreneurs. Since the program began, the company has awarded and financially supported over 250 franchise agreements, including 34 deals in 2019. This year, the company has awarded 22 contracts to Black, Hispanic and Native American entrepreneurs so far, despite the pandemic. In addition, Choice is introducing a hospitality internship program for students attending Historically Black Colleges and Universities, which will debut in 2021.

Radisson Remains on Track With African Expansion INTERNATIONAL REPORT—Radisson Hotel Group has made Africa the center of its growth strategy and aims to…
Choice Hotels Creates 'Commitment To Clean' Initiative ROCKVILLE, MD—Building on the existing dedication to cleanliness at its nearly 6,000 franchised hotels in the…
AHLA, AAHOA create American Hospitality Alliance The nation’s two largest hotel and lodging associations, the Asian American Hotel Owners Association (AAHOA) and…
Iberostar Group Creates Medical Advisory Board PALMA DE MALLORCA, SPAIN—As part of its plan to deal with the COVID-19 pandemic, Iberostar Group…