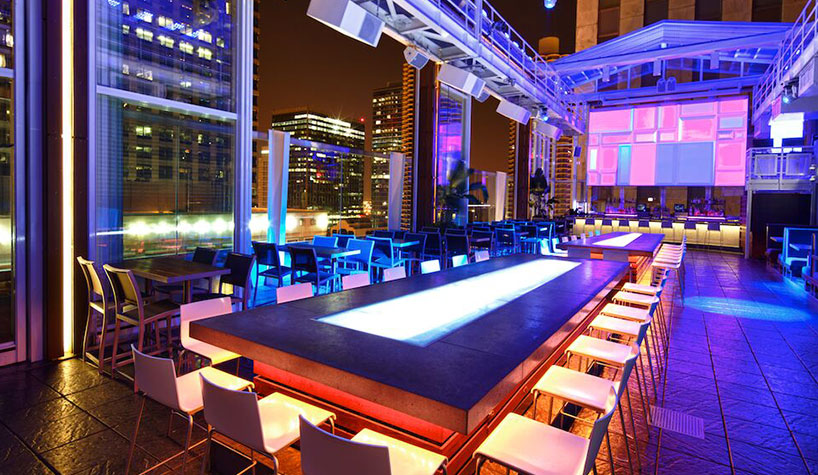 The venue’s wood-burning oven provides the Mushroom Coca, a Spanish flatbread with Montamore cheese, pistachios, preserved lemon and cream sauce, and the La Palma Coca, a flatbread named after a small section of the Canary Islands known for its pineapple. Chef Sears’ twist on the Hawaiian pizza, the La Palma features Spanish chorizo, smoked mozzarella, tomato sauce and Aleppo-roasted pineapple.

Executive Pastry Chef Toni Roberts created a variety of group dessert experiences, including the “By the Fire” station, featuring three mini-dessert displays made from scratch: Sampita, a whipped meringue dessert; Toasted Halva Tartlets, with a caramelized white chocolate ganache; and Toasted Marshmallow Truffle Pops. These displays are alongside the Toast Your Own S’mores station, outfitted with all the fixings and Chef Toni’s house-made marshmallows.

The venue’s Champagne and spirits collection ranges from Louis XIII Grande Champagne Cognac to $20,000 bottles of 1998 Dom Perignon Methuselah. An even more exclusive offering on Roof is the Macallan Experience, one of the most coveted Scotch whiskys in the world, according to operators. As one of only six large-scale venues in Chicago serving the rare pours, the venue offers a Macallan Flight, allowing guests to sample the creations, handpicked from less than 1% of the sherry-seasoned casks in the Macallan reserves.