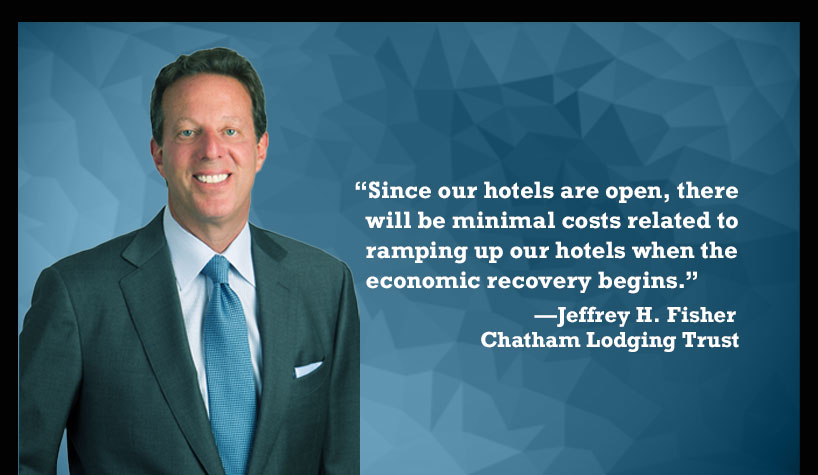 “I am thankful to have our operating platform with [management arm] Island Hospitality, especially now, which gives us the tools to act promptly and more expeditiously than others, and has a meaningful impact on the top and bottom line,” said Jeffrey H. Fisher, president/CEO of Chatham Lodging Trust, on a conference call. “Furthermore, our teams at Chatham and Island have the experience to persevere through these situations, having successfully navigated through numerous cycles.”

Adjusted earnings before interest, taxes, depreciation and amortization (EBITDA) decreased $10.5 million to $16.5 million for the first quarter, while adjusted funds for operation (FFO) was 13 cents per diluted share, compared with 34 cents per diluted share in the first quarter of 2019. Comparable hotel gross operating profit margins weakened 590 basis points to 38%, and comparable hotel EBITDA margins were down 800 basis points to 27.6%.

Fisher noted that his company’s hotels will be ready to go once the industry begins to recover from the COVID-19 crisis.

“Our hotels are benefiting from the closure of many other—mostly full-service—hotels in our markets,” he said. “Since our hotels are open, there will be minimal costs related to ramping up our hotels when the economic recovery begins. We are able to generate more revenue, retain more employees, lose less money and better our overall cash position by remaining open.”

The executive also provided the company’s forecast of the types of hotels that will recover quicker than others.

“As localities start to reopen, we believe that regional drive-to leisure and then corporate demand markets will be the first to come back, with urban drive-to next, followed by fly-to urban markets and then, lastly, group and large-scale events,” he said. “We also believe that premium-branded, extended-stay and limited-service hotels will perform best for the foreseeable future due to their ability to accommodate a variety of different travelers at an attractive price point and provide a safe and reliable environment and positive experience. Big-box hotels with massive amounts of rooms, as well as unbranded hotels, will face a longer road to recovery.”

He added of Chatham, “In addition to the concentration of premium-branded extended-stay hotels in our portfolio, more than 96% of our hotels are limited-service rooms, the highest percentage among public lodging REITs. This should bode well for our portfolio as demand returns.”

Other than the Warner Center development in Woodland Hills, CA, the company also has suspended all remaining capital projects, other than projects required by local fire and life safety regulations or expenditures for emergency purposes.

Hotel Under Development
Chatham is developing and constructing a hotel in the Warner Center submarket of Los Angeles on a parcel of land owned by the company. The company expects the total development costs to be approximately $65 million, inclusive of land of $6.6 million. Including land, the company has incurred costs to date of approximately $27 million.

Capital Markets & Capital Structure
As of March 31, the company had net debt of $609.6 million (total consolidated debt less unrestricted cash). Total debt outstanding was $667.8 million at an average interest rate of 4.4%, composed of $494.6 million of fixed-rate mortgage debt at an average interest rate of 4.7% and $173.0 million outstanding on the company’s $250 million senior unsecured revolving credit facility, which currently carries a 3.5% interest rate.

Chatham’s leverage ratio was approximately 35.6% on March 31, based on the ratio of the company’s net debt to hotel investments at cost. The weighted average maturity date for Chatham’s fixed-rate debt is February 2024, with the earliest maturity in 2021. As of March 31, Chatham’s proportionate share of joint venture debt and unrestricted cash was $165.9 million and $1.8 million, respectively.

ADR for the portfolio has declined since the second week of March. Since then, the lowest nightly ADR occurred on May 7 at $90. ADR for the month of April was $101, and month-to-date ADR in May is $91. Since March 12, the lowest single night RevPAR was $20 on March 29, and the highest single-night RevPAR since then was $28 on May 6.

“Our teams at Chatham and Island Hospitality are working vigorously to maximize revenue, and we have aggressively cut operating costs and deferred all nonessential capital expenditures to minimize the adverse effects on cash flow,” said Fisher. “We have the experience to persevere through difficult situations having lived through numerous cycles and shocks to the industry. We are thankful to have this platform that enables us to move effectively, aggressively and quickly.”