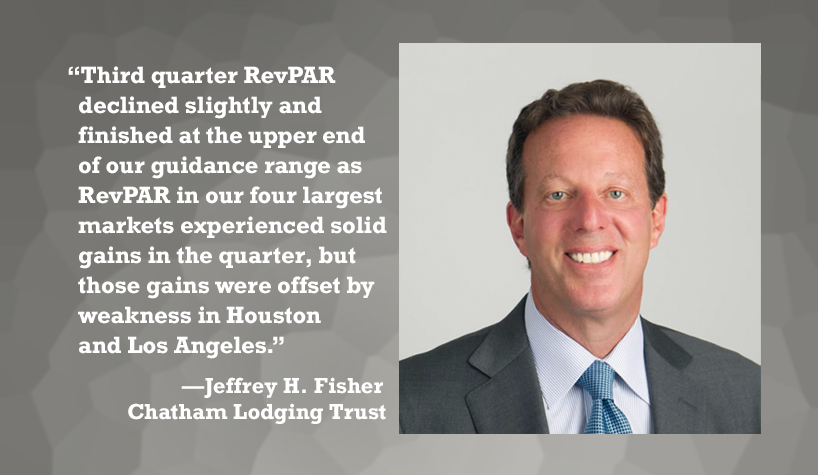 “Third quarter RevPAR declined slightly and finished at the upper end of our guidance range as RevPAR in our four largest markets experienced solid gains in the quarter, but those gains were offset by weakness in Houston and Los Angeles,” said Jeffrey H. Fisher, president/CEO, Chatham Lodging Trust. “Additionally, our three Boston hotels experienced a RevPAR decline of 6.3% as two of those hotels benefitted from demand related to the Boston area gas explosions during the latter half of September 2018. Excluding the four hotels under renovation during the 2019 third quarter, 24 of our 36 hotels experienced RevPAR growth in the quarter.”

Net Income declined $4.6 million to $10.1 million, compared to the 2018 third quarter, driven by the company’s proportionate share of impairment losses in its unconsolidated joint ventures. Net income per diluted share was $0.21 versus $0.31 for the same period a year earlier.

“We were very pleased with our hotel operating performance in the quarter as we continue to collaborate with Island Hospitality on a daily basis to increase revenue and reduce operating expenses or minimize increases, and this supports our thesis that we operate a best-in-class platform,” said Dennis Craven, COO, Chatham Lodging Trust. “It really is remarkable to increase margins despite a RevPAR decline. That outperformance enabled us to beat the upper end of our EBITDA and FFO guidance. Other revenue was up 22% in the quarter, driven primarily by incremental parking revenue. On the operating expense side, previously implemented programs focused on reducing repairs and maintenance expenses helped us reduce those costs $0.1 million in the quarter and improved margins by approximately 20 basis points.”