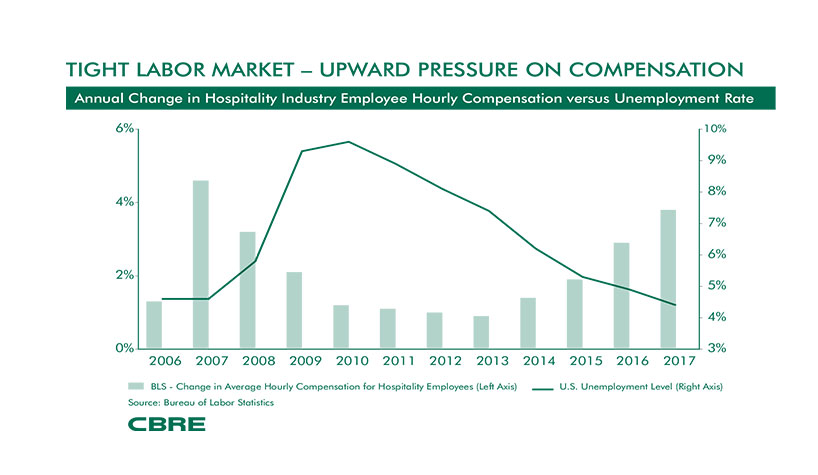 “U.S. hoteliers enjoyed an eighth consecutive year of increasing profits in this past year despite another slowdown in the rate of revenue growth,” said R. Mark Woodworth, senior managing director at CBRE Hotels’ Americas Research. “Specifically, total operating revenue increased by 2% in 2017 for the average hotel in the survey sample. Fortunately, by limiting the growth in operating expenses to 1.9%, managers at the Trends properties realized a 2.2% increase in gross operating profits (GOP) for the period.”

Woodworth provided a brief review of the current state of the factors that have characterized one or more of the last three industry contractions. CBRE found the following:

“Some observers sense a bubble may be present in the stock market, while others think housing markets may have become overheated,” he said. “Our own sense is that neither situation warrants undo concern and that no bubbles are likely on the horizon.”

“At the local level, we expect 36 of the 60 U.S. cities that comprise our Hotel Horizons forecast universe will realize an increase in supply above their long run average in 2018,” said Woodworth. “Within this group, however, we expect that only 10 markets—led by Nashville, Ft. Lauderdale and Los Angeles—will realize supply growth this year of more than twice their STR long run average. In total, we do not see a threat looming because of too much new supply too soon.”

While the fundamentals are sound and portend a continued, protracted period of topline revenue growth, the expanding scarcity of labor in many markets around the country threatens commensurate levels of profit increases.

Labor and related expenses in the trends sample represented 42.4% of total expenses this past year. While managers were able to limit the year-over-year gain to 1.8% in 2017, this ability will likely be short lived as the unemployment rate continues to decline. These conditions are made worse by the laggard increases in the domestic labor force. Slow labor force growth is a result, in part, of decelerating growth of the civilian population, which the Bureau of Labor Statistics projects to grow at an annual rate of 0.9% from 2016 to 2026. This growth is slower than the rates witnessed during previous decades, 1% from 2006 to 2016, and 1.3% from 1996 to 2006.

Further, about nine out of 10 new jobs are projected to be added in the service-providing sector (including leisure and hospitality) from 2016 to 2026, resulting in more than 10.5 million new jobs, or 0.8% annual growth. Conversely, the goods-producing sector is expected to increase by only 219,000 jobs, growing at a rate of 0.1% per year over the projections decade.

“We expect that managing increases in labor and related expenses, combined with proactive efforts focused on enhanced productivity, will be an operator headline issue for many years to come,” he said.

CBRE: U.S. lodging demand forecast to return to pre-pandemic levels by Q4 ’23 Based on stronger than expected performance during the first quarter of 2021, plus encouraging economic and…
CBRE tempers expectations due to Delta variant The COVID-19 Delta variant’s emergence and spread has hampered plans for group and business travel this…
CBRE: Australian hotels sales hit a five-year high after surging close to $2B Australian hotels sales have surged to almost $2 billion this year—hitting a five-year high and up…
CBRE: Vaccinations, economic stimulus spur stronger second half for U.S. hotels The continued rollout of COVID-19 vaccinations and additional stimulus funds have strengthened the foundation for the…