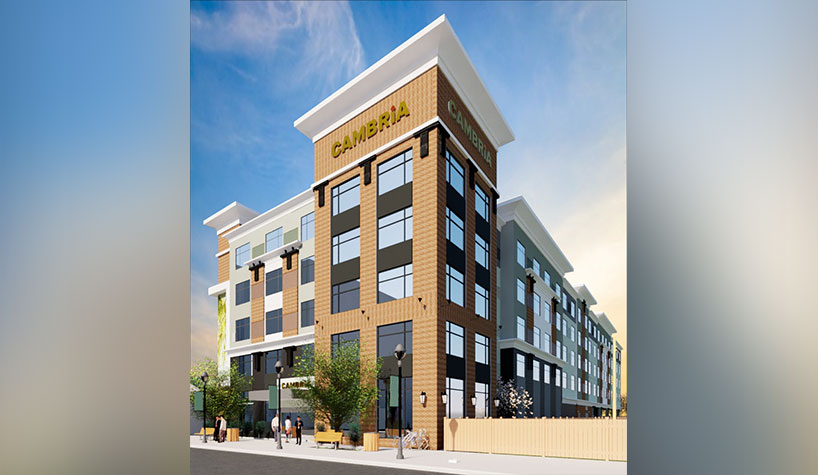 ROCKVILLE, MD—Choice Hotels International Inc. has awarded franchise agreements to Lloyd Hospitality and MWA LLC to develop new Cambria hotels in Kansas City, MO, and Indianapolis, respectively. Slated to be the first Cambria in Missouri and the third in Indiana, these hotels will continue to drive the upscale brand’s rapid U.S. expansion when they open in 2021.

The five-story, 148-room Cambria Indianapolis Downtown is planned for construction at 850 South Meridian St., with access to Interstate 70 and Indianapolis International Airport. The hotel will be near the headquarters of several corporations, including Anthem, Eli Lilly and Company, the NCAA and Rolls Royce North America. Lucas Oil Stadium and the Indiana Convention Center, two of the Midwest’s largest event venues, will be within walking distance, as well as the Indianapolis City Market.

Located at 205 W. 9th St., the six-story, 149-room Cambria Kansas City – Downtown will be a few blocks from the city’s Power and Light District. The hotel’s location will offer guests access to many of the area’s most popular restaurants, shops and attractions, including the Sprint Center, the KC Convention Center and KC Live. The hotel will also be near the corporate headquarters of Cerner, DST Systems and Hallmark Cards. The nearby Riverfront Heritage Trail will give hotel guests an opportunity to stroll along the Missouri River.

These agreements continue to fuel the Cambria brand’s busy year, in which seven hotels have already opened their doors, with up to six more hotels representing almost 1,000 rooms expected to open in top-tier markets across the country before the year’s end.

“These new agreements are just the latest example of developer interest in the Cambria brand,” said Mark Shalala, VP, franchise development, upscale brands, Choice Hotels. “Both Kansas City and downtown Indianapolis are enjoying significant economic growth, driven by a surge in investment and rise in annual visitors. Cambria, which is purpose-built to thrive in major markets serving the needs of today’s modern business traveler, will be a hit with business and leisure travelers in these great Midwestern cities.”

The Cambria hotels in Indianapolis and Kansas City will feature the following upscale amenities:

Both Lloyd Hospitality and MWA LLC bring a wide range of experience developing hospitality and construction projects in Kansas City and Indianapolis, respectively.

There are currently more than 45 Cambria hotels open across the U.S. in popular cities, such as Chicago; Dallas; Los Angeles; Nashville, TN; New York; New Orleans; Phoenix; and Washington, DC. The brand is on pace to break its openings record for the second-straight year and is fast approaching 50 open Cambria hotels, including soon-to-open properties in Anaheim and South Boston.

Cambria Hotels Continues Expansion Across Tennessee ROCKVILLE, MD —Choice Hotels International, Inc. has awarded franchise agreements to Victor Patel of VRL Hotels…
Motto by Hilton Breaks Ground in Atlanta; Plans for Global Expansion MCLEAN, VA—Hilton celebrated the groundbreaking of one of the first Motto by Hilton hotels, in the…
Selina plans expansion in key global markets Selina, a hospitality and experiential brand targeting millennial and Gen Z travelers, has revealed plans to…
CitizenM Plans Global Expansion in 2020 AMSTERDAM—CitizenM has expansion plans for 2020. With openings planned for the U.S. and Europe, CitizenM will…