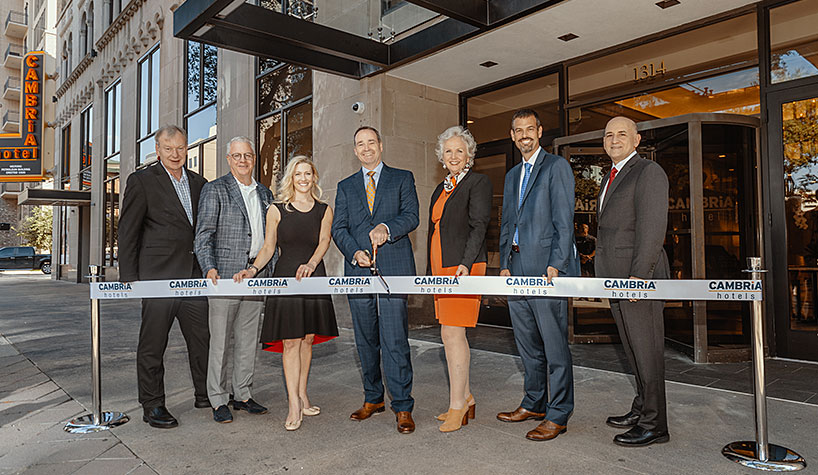 NATIONAL REPORT—Hotels are setting up shop in the Lone Star State, including the arrival of the first Cambria in Houston. See what’s new:

During the opening ceremony for the property, a $7,000 check was presented by Cambria to Kinder High School for the Performing and Visual Arts, which provides highly specialized and rigorous training in creative writing, dance, music, theatre and visual arts to Houston students.

Located at 3220 Katy Freeway, the 147-room hotel will operate as a Marriott franchise, owned by Rise Management Inc. and managed by LBA Hospitality of Dothan, AL.

The eight-story hotel has an outdoor swimming pool, fitness center, gated parking garage and guest laundry, and offers 950 sq. ft. of meeting space to accommodate functions of up to 130 people.

The Aloft Dallas Euless recently opened its doors in Texas. The 132-room hotel will operate as a Marriott franchise, owned by A&M Hotels and managed by Strand Hospitality of Myrtle Beach, SC.

Located in the center of Glade Parks Town Center, eight miles from Dallas/Fort Worth International Airport, the Aloft Dallas Euless is close to Six Flags Over Texas, AT&T Stadium and Globe Life Field. The five-story hotel is nearby to numerous shopping, dining and entertainment options, including Dave & Busters, which is located steps away.

The SpringHill Suites Dallas McKinney/Allen has opened in McKinney, TX. The 125-suite hotel operates as a Marriott franchise, owned and managed by Atlantic Hotels Group of Dallas.

The property is close to Eldorado Plaza, the Heard Museum, Tupps Brewery and historic downtown McKinney.