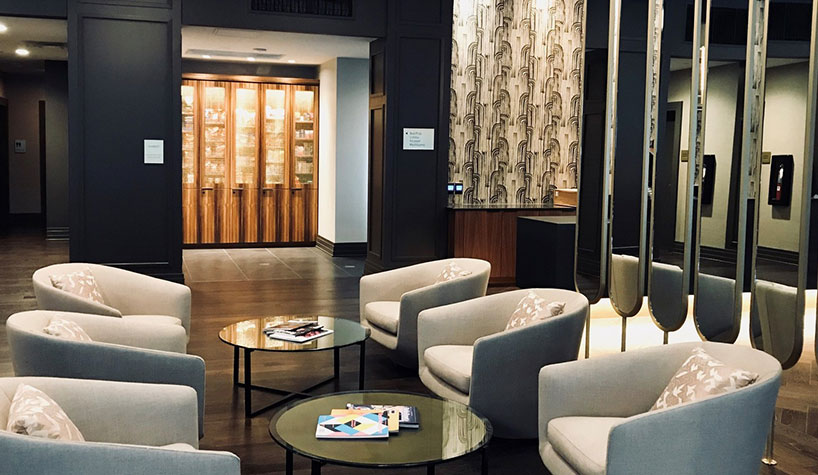 In collaboration with owner Kirtland Realty Group, developer Todd Interests and management company Fillmore Hospitality, the Cambria Hotel Downtown Dallas is now fully open after partially opening at the end of 2017. The 177-room, 22-floor property is an adaptive-reuse of the historic Tower Petroleum Building.

The Cambria Hotel Downtown Dallas reflects the building’s 87-year-old history with Art Deco style and maintains its iconic zigzag exterior. The property features locally inspired art and a full-service restaurant and bar, with signature cocktails, wine, and local craft beers, as well as grab-and-go gourmet salads and sandwiches. Additionally, the hotel has 1,500 sq. ft. of multifunction meeting space and a fitness center.

Located in the Central Business District of Dallas, the hotel is near several corporate headquarters, including Southwest Airlines, Texas Instruments and AT&T, as well as many popular destinations, such as the Dallas Convention Center, American Airlines Center, Dallas World Aquarium, Sixth Floor Museum at Dealey Plaza, Deep Ellum, and Baylor University Medical Center.

The brand is also opening a hotel in Philadelphia this month. The Cambria hotel will open at Broad and Locust in late March and will feature Attico, the largest roof-top restaurant/bar on the Avenue of the Arts. The 15-story, 223-room boutique hotel was developed by Pearl Properties and designed by DAS Architects.

“The building design embraces Philadelphia’s street-level vitality,” said David A. Schultz, co-founder and principal of DAS Architects. “Broad Street’s landmark older buildings with beautiful cornices and trim inspired our facade, in which we used multiple vertical frames to create shadow and depth. We pulled the building back from the street to create a drop-off zone and a generous pedestrian walkway. The angled southwest edge is a gesture to City Hall, allowing corner suites a view north, but all rooms will have great views of everything happening on the Avenue of the Arts, at the Kimmel Center, the Academy of Music or east to the Delaware River.”

The hotel will offer accommodations in nine suites and 214 guestrooms. Other amenities will include a boardroom for small meetings, a conference room that can seat 112, and a 1,600-sq.-ft. fitness center on the third floor. The 3,000-sq.-ft. rooftop Attico lounge will have a fire pit and views of the Philadelphia skyline and Delaware River. The ground floor of the hotel will be home to a new Del Frisco’s Grille, set to open in October 2018.