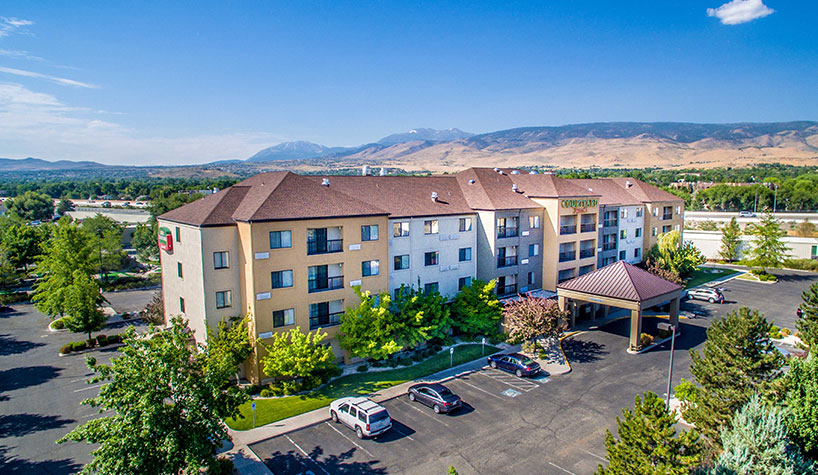 NATIONAL REPORT—Who’s buying and selling? Here’s a look at some of the latest deals in the hotel industry.

Hunter Hotel Advisors represented the owners in the sale of the 117-room Courtyard by Marriott Reno Nevada. An affiliate of Sandpiper LLC, a Virginia-based hospitality investment firm, purchased the hotel, attracted to the in-place cash flow and location. Teague Hunter, president of Hunter Hotel Advisors, and SVPs Danny Givertz and Trey Scott worked together to complete a quick but effective marketing and sales process, which garnered more than a dozen offers, from both regional owners/investors to private equity groups and REITs.

“The Reno-Tahoe corridor is a desirable and dynamic market that continues to attract institutional interest”, said Givertz.

Sandpiper’s acquisition is its first in the Western U.S., and the company plans an extensive renovation to start in the fall, which will include the exterior facade, the guestrooms and the Lobby & Bistro.

The Courtyard will be managed by the new owner, Sandpiper LLC.

Hunter Hotel Advisors has also represented an institutional owner in the sale of the Residence Inn Huntsville to suburban Chicago-based Helix Hospitality.

Teague Hunter, president of Hunter Hotel Advisors, and Tim Osborne represented the seller in the negotiations. According to Hunter, “We were able to deliver a straightforward closing at the high end of initial pricing expectations for our client.”

JR Patel, Helix Hospitality’s president, said, “The Residence Inn plays a key role in our overall growth strategy for 2018. The property is well positioned in the dynamic Huntsville market, which we anticipate will continue to grow in the coming years.”

The newly renovated, all-suite, extended-stay hotel is located near the Redstone Arsenal, a 38,000-acre United States Army facility that is home to over 60 different federal agencies, including NASA. Area corporate demand generators include Boeing and Lockheed Martin. The Residence Inn Huntsville will also benefit from the recently announced $1.6-billion Toyota/Mazda joint assembly plant anticipated to employ up to 4,000 workers.

HFF marketed the property on behalf of the seller, a partnership between Northview Hotel Group and funds managed by Oaktree Capital Management L.P. KDG Capital purchased the hotel free and clear of existing debt and unencumbered of a management contract.

Situated on more than 1,700 acres between the Willamette National Forest and the Deschutes River at 1522 Cline Falls Rd., Eagle Crest Resort is eight miles from the Redmond Municipal Airport, which provides nonstop service to most major Western U.S. markets. Eagle Crest features three golf courses, three sports centers, a full-service spa, a conference center, an equestrian center and an abundance of outdoor activities, including biking, fishing, hiking, skiing, rock climbing and snowshoe tours. Originally built in 1985, the hotel has undergone upgrades and renovations as recently as 2014.