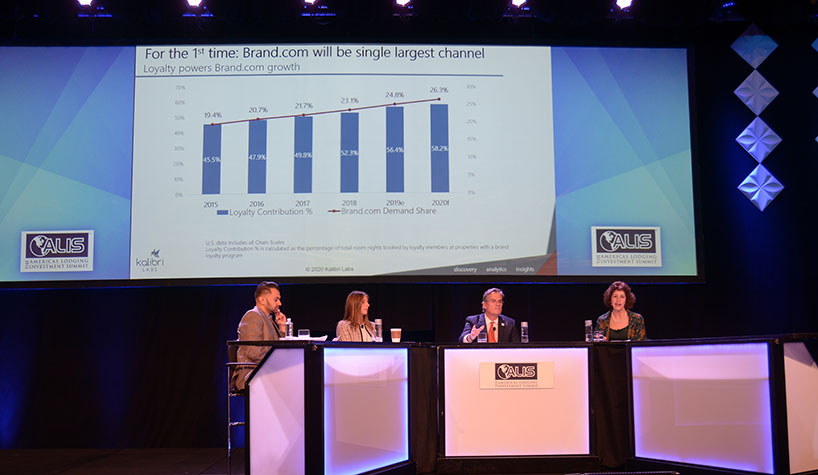 LOS ANGELES—What’s the outlook for the hotel lodging industry in 2020? With supply outpacing demand and pricing power virtually nonexistent, RevPAR is expected to be flat in the coming year.

In a bit of good news, STR revised demand up slightly. “We do think the economy is stable; we expect GDP growth to be at 1.7% in 2020, so there will be demand growth, and that’s demand growth on top of all-time record highs,” Hite said. “It’s pretty positive news around demand.”

However, with supply outpacing demand, there will be negative occupancy growth. The real story, she said, is the lack of pricing power. “While the economy seems to have stabilized and is pretty good for 2020, there’s just nothing else there that tells us that hoteliers are going to have any more pricing power in 2020 than they’ve had over the last year or two,” she said.

“There’s an absence—not just lack—but absence of pricing power in our industry,” Mark Woodworth, senior managing director, CBRE Hotels Research, added. “There’s a lot of research that’s been done trying to understand this issue…There’s a growing suspicion that the whole axiom of high occupancies, which leads to scarcity, which drives prices up may no longer hold true in our industry. It’s very clear now that one view might be that in real terms, average daily rate levels are really going to run in sync with occupancies, so therefore, if we don’t see much change in occupancy going forward, perhaps we won’t see much change in pricing in real terms. What we also know is when occupancies decline—we too have a short pullback expected this year—that clearly puts downward pressure on pricing capabilities.”

Woodworth noted that CBRE was slightly more optimistic than STR—a preliminary forecast has RevPAR increasing 1.1% in 2020 and 0.7% in 2021—but, he said, “Most importantly, we don’t see an end.”

Cindy Estis Green, CEO/co-founder, Kalibri Labs, added some more context for what slowing or flat revenue growth will mean going forward, pointing to metrics like guest paid revenue, which is what the hotels collect in addition to what the wholesalers, merchant model and opaque OTAs collect, as well as net revenue, which is the revenue after all of the commissions, transaction fees, loyalty costs and marketing expenses are taken out.

“We expect a slight slowdown in guest paid revenue growth from last year’s growth, which was about 1.5%; we expect it to be 1.3% this year,” she said. “[With net revenue], we see a change in growth; there is still growth, but it’s only about 0.9%.”

Simply put, Green said, Kalibri Labs tracks the answer to this question: How much does a hotel keep of what the guests pay? “Across the industry, we’ve seen it drop to below 83% and we anticipate that for 2020,” she said. “We’ve lost about 36 basis points. The year before, we dropped about 33 basis points. That means that the revenue may increase, but we’re able to keep less of it. Thirty-six basis points equates to about $600 million in revenue that is not flowing through to the bottom line.” This, in turn, affects asset values.

“As RevPAR has grown, it’s masked this reduction in revenue capture,” she said. “Even when the revenue is growing, the profit and flow-through is dropping as a result of these costs.”

Green noted that one reason for this is that for the first time in the industry’s history, brand.com will be the single largest channel. “Property direct has declined; it used to be 50 or 60%, and it’s declined now to 25%, but brand.com will be 26%, or a fourth of the bookings,” she said. “If we dig deeper into that, we can see that the brand.com has driven loyalty, but loyalty contribution is expected to be six in 10 room nights out of the total room nights sold, which is a very large number. So, it looks like brand.com drove loyalty and now loyalty is driving brand.com. The good news is brand.com is in the pole position; the concern is the cost it’s taking in order to acquire this revenue [especially amid] slowing revenue growth going forward in the next couple of years.”

Report: 'Worrying' lack of women at the top of hospitality, travel and tourism… Travel and tourism is one of the world’s most gender diverse industries, with a 50-50 overall…
GBTA: Omicron causes business travel industry concerns The recent emergence and yet-unknown trajectory of a new COVID-19 variant is the latest development on…
CWT: Global business travel pricing set to increase in 2022 Global travel pricing across hotels, air and ground is expected to increase in the next two…
MMGY survey: Omicron variant becomes a concern for U.S. travelers According to MMGY Global’s latest survey of U.S. adults, 45% of respondents who are familiar with…