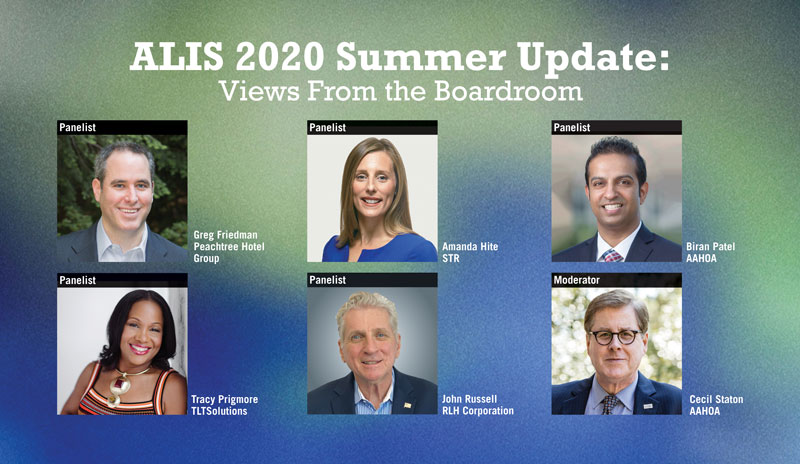 NATIONAL REPORT—For the second of three webcasts in the Americas Lodging Investment Summit (ALIS) Summer Updates series, industry leaders discussed managing through the COVID-19 crisis, operations changes and other topics in “Views From the Boardroom.”

Staton kicked off the session asking the panelists about their leadership during the pandemic.

Hite stressed the importance of being transparent with her employees, adding, “I’m thankful for a lot of friends that I can give a call and pick their brain and say, ‘Hey, what are you thinking about?’ and just trade perspectives and ideas, because there is no right answer right now. It is really making sure that you’re considering every idea, all the crazy ones that you would normally walk away from. This is the time that you have to think about it because there’s no rule book or playbook for us.”

Friedman noted, “You have to remind the team that there’s dark days today, but the reality is there’s going to be light at the end of the tunnel and much better days ahead.”

For Prigmore, it’s all about leading from her heart and then her head. “First, I wanted to be empathetic and think about what others needed from me as a leader, and then I got into my head to figure out ‘’Where do we go from here?’” she said.

Russell, who has more than 40 years of industry experience, noted, “This is the first time in my lifetime that we’ve had one common enemy worldwide—COVID-19 and all the devastation that it brought with it,” adding that leadership is all about “communication, communication, communication. You need to communicate daily, weekly, monthly with your owners, your franchisees, your employees, your guests and, in our case, our shareholders.”

When asked by Staton about changes in operations and how hotels will be different from a guest perspective, Patel responded, “During this crisis, hoteliers are making health and safety, along with cleanliness, a top priority—even more now than before. Making the guests feel comfortable in traveling again and staying in hotels is the ultimate goal. Some of the changes that I’ve seen include digital check-in that’s even more prevalent now; opt-in opt-out housekeeping; breakfast items have been cut down to grab and go; there’s fewer amenities in the rooms; guests are having to take their own luggage up to their rooms; valet service is gone and even our shuttle service have been minimized.”

Friedman agreed, adding, “The reality is our industry is really pivoting from being high-touch, high-service to being more low-touch, low-service as it relates to the guests. As an industry, we have the ability, as we’re going through this pandemic and as we come out of it, to potentially reset the guest’s expectation, especially as it relates to some of the select-service and limited-service hotels.”

Russell brought up that, due to guests wanting to social distance, outdoor spaces will be used more. “I think that lot of hotels that have the space will do things outside in their courtyards, bringing food outside, beverages outside or even meetings outside,” he said. “I think all of us are helping our brands, franchisees and owners by negotiating with our vendors to try to bring down some costs to our owner-operators.”

He also believes that exterior-corridor hotels “will do quite well in this environment where you can drive up, pull up and go right to your room and maybe check in on your phone, and pay for your room with PayPal on your phone.”

In discussing what the development pipeline has looked like over the past few months, Hite said that June was a little down from May. “So, there’ve been some rooms that opened and came out of the pipeline, but overall we still have more rooms in the pipeline today than we did last year. What we saw in June, though, was that we had 34 projects in the pipeline that were either in planning or final planning have now moved out to deferred. That is in line with what we were thinking. There will be projects that have not gone under construction yet, that aren’t in the ground, and the investors or owners are going to just say, ‘We’re going to put on the brakes a little bit.’”

She added, “We are starting to see some of that slowdown in the projects that are in final planning or planning, but everything that’s under construction, they certainly will come online slower than what was anticipated because construction sites were shut down in most of the country for a period of time—but we do expect all of those rooms to enter into the supply at some point over the next 18 months or so.”

Russell addressed the pipeline from a franchise sales perspective. “There’s definitely been a slowdown in the number of franchises sold. I think that the owners/operators out there today, as everybody knows, they want to preserve cash,” he said. “They’re concerned about liquidity, they have to pay their mortgages and their heating and power bills, and they have to take care of their employees and their families. A lot of potential franchisees today have put things on pause until things get a little bit better. On a positive note, the pipeline still seems to be robust for us, and I think it’s [the same] for a lot of other franchise companies as well.”

The Lending Landscape
On the subject of liquidity, Friedman said, “The reality is there’s a lack of normal bank debt, so from a standpoint of going out and refinancing a hotel or getting a loan from a regulated bank, from CMBS and even from certain debt funds or mortgage REITs, there’s really a lack of debt capital out there today. So, if there’s a shortage of capital that someone needs right now, they can’t really access traditional bank debt.”

Prigmore was asked about the relationships with lenders during the crisis as loans are about to mature or come to the end of the original forbearance.

“Many colleagues that I’ve spoken with are having very positive experiences with certain types of lenders. For our company, we have a community bank that’s a lender, and they have been absolutely wonderful,” she said. “I had put together a full presentation about what the impact was going to be, and what we thought we would see, and I went to them and they already had a plan for us. Then, when we went back after 90 days wasn’t enough, they were very accommodating, and we’ve come up with a plan that will last to the end of the year.”

One lender, however, wasn’t so accommodating. “On the other side, I have a private equity lender. I was proactive and thought I was doing well by reaching out very early on in early March when we knew that this was going to be a problem,” she noted. “They said absolutely, unequivocally, no deferment, no forbearance and ‘We will exercise our rights for a default should you not pay.’ We’ve moved down the road and we’re not in default on anything; we’ve paid every single mortgage payment.”

Since the topic of the discussion was “Views From the Boardroom,” Staton asked Russell what he has said to his board.

“I think all of us have changed the way we approach business today, and it could be many of these things will be long-lasting. I try to work with both our employees and our board because we work for the board and the board actually works for the shareholders. It’s keeping everybody focused on the mission,” he pointed out. “In our case, it’s really one of four things. Our goal is to recruit new franchisees and sell to our existing franchise base. It’s to open franchises as quickly as possible within reason, so the franchisee owner can start making money, as well as the company. It’s adding value through programs that either increase occupancy and revenue, or decrease expenses. And the last thing is retention. Let’s keep let’s keep our franchisees happy, successful and keep them in the family; that’s what helps grow a franchise company and the franchise system.”

To conclude the session, Patel had the final word. “The hospitality industry is resilient. We’ve gone through so much in the past, and we’ve come out on the other side,” he said. “When it’s all said and done, we’ll come out to be better owners/operators and better companies. If we just keep being educated and try to stay afloat during these times, I think we’ll come out on the other side being even better.”