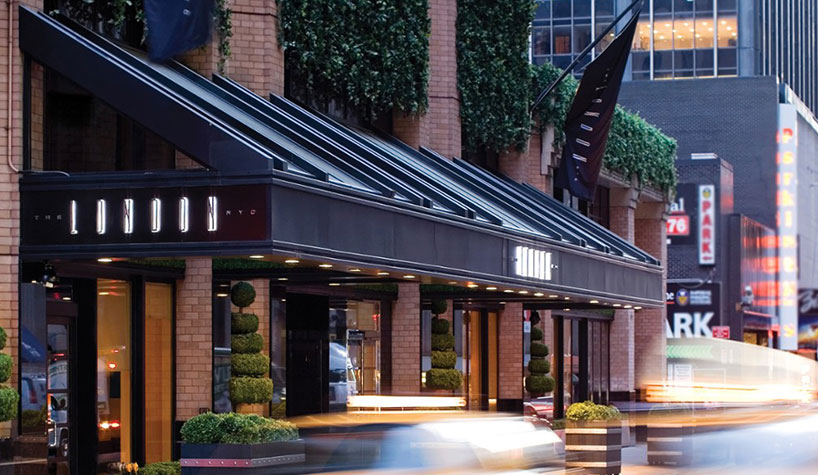 In New York City, The London will become the Conrad New York Midtown.

NATIONAL REPORT—Change is constant and that’s also true of the hospitality industry. Here’s a look at the rebranding efforts for four properties:

Formerly The London, Conrad New York Midtown is in the final stages of a top-to-bottom renovation, which will result in a reflagging.

With more than 500 suites, the 54-floor property offers sweeping views of Central Park from the hotel’s central location on 54th St. between 6th and 7th Ave. Reminiscent of the upscale Midtown residence of a contemporary art collector, the decor is modern and timeless with an overall emphasis on art.

Suites are starting at 525 sq. ft., including a one-of-a-kind Atrium Suite with a greenhouse-like living space enclosed in all glass surrounds and a 2,700-sq.-ft. split-level two-bedroom penthouse suite.

The design is led by Stonehill Taylor. New York City’s private pied-à-terres served as inspiration for a revitalized hotel with a focus on elegance and serenity.

The Gabriel Miami has joined Hilton’s growing collection brand, serving guests in the diverse, cosmopolitan city of Miami. Formerly known as the ME by Melia, the property has 129 guestrooms and suites and is proximate to Wynwood, the Design District and Miami Beach.

The property also heralds the arrival of the new upscale Latin American-inspired dining concept, which is helmed by Executive Chef Fabian Di Paolo. Elsewhere, there’s over 13,000 sq. ft. of dining and meeting and events space, including a third-floor library and lounge, rooftop pool deck and bar and the newly opened full-service Dermanova Spa.

Renovations at the four building, two-story, three-acre hotel include new guestrooms and suites, relocation of lobby and redesign of entrance with exterior circular entry, two remodeled pools with cabanas and new restaurant/bar concept. Guests will enter the newly designed hotel lobby and sit down to check-in with front desk associates at conversational tables. Reservations open in November and renovations are scheduled for completion this winter.

The architecture firm for the Welwood Hotel is MDR Architects Inc. and the Hotel designer is Amsterdam-based SZ Design.

The Eliot Hotel will be a part of Preferred Hotels & Resorts’ Collection, a group with only five Boston-area hotels. The independent hotel brand represents more than 750 distinctive hotels, resorts, residences, and hotel groups across 85 countries.

In celebration of this new chapter, The Eliot Hotel has debuted a refreshed branding by design firm Might + Main. A sleek, modernized version of their signature lion-clad logo now appears on all branded materials, mirroring its luxury accommodations.